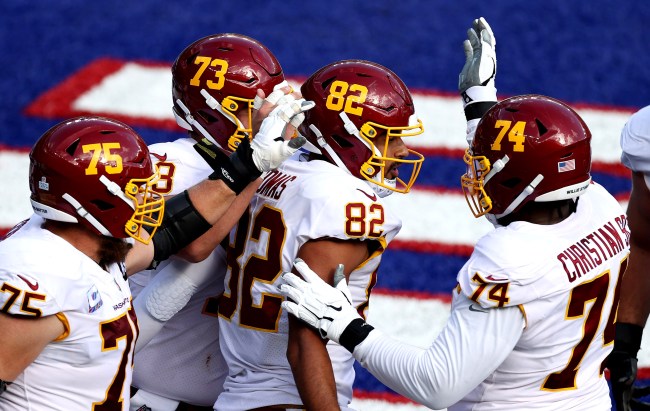 Despite a plethora of solid nickname choices being put forth by fans when the Washington NFL team finally decided that, yes, the name Redskins was actually offensive, the organization chose to go with no nickname for the 2020 NFL season.

Instead something cool like the Columbia Red Tails or the Washington RedWolves, Daniel Snyder and company went with the most generic name they could think of: the Washington Football Team.

The team claimed that the blasé nickname was only going to be a temporary placeholder until they finally settled on a new nickname that everyone assumed would go into effect during the 2021 NFL season.

You know what happens to people who assume, right?

According to WJLA-ABC 7 in Washington, fans may be waiting a little bit longer than anticipated for the Washington Football Team to get a new nickname.

“Everybody needs to take a deep breath,” said Washington team president Jason Wright about the new nickname. “It’s not coming tomorrow. It’s a business decision, we need to understand that market. More importantly, it’s important to engage the community and the fans. We’re also in the process of identifying the folks that should weigh in over time. We want this name and brand to represent the entire area, to represent the fan base, but to also attract new folks to this fan base. We want to grow this fan base as part of our new identity.”

So, apparently, it’s going to take more than one year to come up with a suitable new nickname for the Washington football franchise.

“I think next year is fast because of how the brand has to come together through uniforms, through approval processes through the league,” said Wright. “Next year is fast. There is a pretty good chance we will still be the Washington Football Team next season. We could get there quicker, it’s actually pretty hard to get there that quickly because of all the steps that need to happen.”

Wright even encouraged fans to visit WashingtonJourney.com to offer up their suggestions for the team.

Team owner Daniel Snyder has said in the past that Washington Football Team could end up being the permanent moniker for the team so this at least makes it sound like some progress is being made towards a new nickname.

Regardless, the team’s new uniforms do look pretty slick, even if the team is just 1-5 and mired in another season of lawsuits and allegations.