What Happened To Eric Gagné? Here’s A Look Back At Career Of The Rec Spec-Rocking Closer 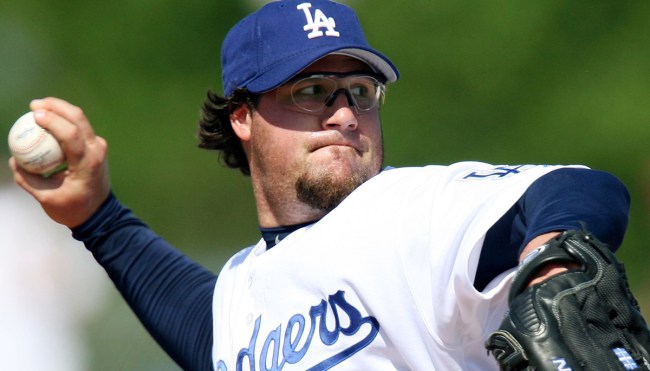 Great closers in baseball are like comets streaking across the night sky: they seemingly come out of nowhere, grab everyone’s attention for a spell, and then vanish just as quickly as they appeared.

There are, of course, exceptions, like the great Mariano Rivera, Dennis Eckersley, and Trevor Hoffman (among others). Those pitchers are rightfully remembered for their achievements, but the comet closers are the guys who put up comparable numbers for a season or two but lack their staying power.

Eric Gagné, the barrel-chested Canadian who pitched for the Los Angeles Dodgers, Texas Rangers, Boston Red Sox, and Milwaukee Brewers, was one such comet closer. One minute, he was emerging from the friendly confines of Québéc, and the next, he was keeping himself busy with a series of failed comeback attempts.

In between, however, he flirted with being unstoppable on the mound. Armed with an array of pitches highlighted by his “Bugs Bunny curveball,” Gagné dominated during his time with the Dodgers, at one time converting 83 consecutive save appearances and winning the Cy Young award in 2003.

Injuries and steroid allegations would contribute greatly to his demise and nearly a decade after he signed as an amateur free agent with the Dodgers, Gagné was out of professional baseball—so let’s take a look at what led up to that and everything that happened in its wake.

Gagné was born in Mascouche, Quebec, a town just outside of Montreal. Growing up, he split his time playing hockey and baseball but excelled at the latter (his brother, Paul Gagné, who would be the hockey player in the family, as he appeared in nearly 400 games in the NHL between 1980 and 1990).

Gagné, the baseball-playing brother, would go on to play for Canada’s Junior World Championship teams before heading down to the states for college at  Seminole Junior College in Seminole, Oklahoma. Growing up speaking mainly French, Gagné learned English by watching television, mainly Kenan and Kel.

In the 1994 draft, Gagné was drafted in the 30th round by the Chicago White Sox, which is fascinating mainly because I didn’t know there were 30 rounds in the draft (that seems excessive until you consider the 2019 MLB Draft went on for 40 rounds seems excessive. Good God, baseball. Can’t you do anything that doesn’t take forever?).

Gagné never ended up playing for the White Sox organization and was signed as an amateur free agent by the Dodgers a year later.

Eric Gagné’s Time With The Dodgers

As with all professional baseball players, Gagné, who was being used as a starting pitcher at the time, began his career in the minor leagues. His development was derailed in 1997 when he underwent Tommy John surgery, forcing him to miss time. He would go on to make his professional debut two years later where he threw six shutout innings against the Florida Marlins. It would be one of five appearances he made in 1999, eventually going 1-1 with 2.10 era. He would go 10-13 over the next three seasons.

In 2002, Dodgers’ closer Jeff Shaw’s retirement and the potential of Gagné led to the Canadian being moved to the bullpen and taking over as the team’s closer. From there, things started to click—and by “click,” I mean “work incredibly well.”

The following year, Gagné was even better. He continued his streak of consecutive save opportunities converted and built upon his success in 2002 to notch a league-high 55 saves while recording a 1.20 ERA and logging 137 strikeouts.

He was not only named to the All-Star again but came away with the National League Cy Young, making him the first reliever to win the award in 11 years and the second Canadian to ever to do so (joining Ferguson Jenkins.) He was also the first pitcher to win the award with a losing record, but who’s counting (speaking of counting, his performance that year earned him a nice raise with his salary jumping from $550,000 to $5 million)?

2004 would be Gagné’s last great year. His numbers were still impressive, but didn’t reach the heights of the previous two campaigns. He recorded 45 saves, posted a 2.19 ERA, and logged 114 strikeouts (he was seventh in Cy Young voting, eleventh in MVP voting, and was again named an All-Star).

Soon, injuries would begin to derail his career and his next two years were essentially lost. He made only 14 appearances in 2005 and 2 in 2006 with that season eventually being cut short so he could have back surgery.

When the time came to renew his contract, the Dodgers declined, making Gagné a free agent, thus ending his brief but mightily impressive run with the Dodgers.

Eric’s Gagné’s Career After The Dodgers

Gagné’s first stop after leaving Los Angeles was Texas, where he signed a one-year deal with the Rangers. Due to issues lingering from his back surgery, he started the season on the disabled list, briefly came back, and was promptly placed back on the shelf as he complained about leg pain. Upon his return, Gagné recorded 16 saves and an ERA of 2.16.

The Boston Red Sox traded for Gagné at the trade deadline, bringing him to Boston to ideally help an already solid bullpen and serve as the set-up man for the Red Sox closer Jonathan Papelbon. Things did not go much better for Gagné with the Red Sox. In 20 appearances, he recorded a 6.75 ERA. The Red Sox would go on to win the World Series that year, but that had little to do with Gagné, who (despite his struggles) did still make the team’s postseason roster.

Shortly after the Red Sox won the World Series, Gagné’s name appeared in the Mitchell Report, which featured a collection of evidence compiled by George Mitchell that detailed the use of steroids in Major League Baseball. Gagné was one of the report’s more high-profile names alongside fellow pitchers Roger Clemens and Andy Pettitte. Like others listed in the report, Gagné was said to have received deliveries of Human Growth Hormone (HGH) sent by steroids dealer Kirk Radomski.

In 2009, Gagné told the Los Angeles Times, “I’m not denying it. I’m not saying I did it. I just can’t talk about it. It’s a touchy subject. It doesn’t just involve me. I’ve been straightforward about everything. It [stinks] that I can’t be about this. I’m not looking for sympathy anyway. I have to live with this the rest of my life. I’m going to have to explain this to my kids. It’s going to be on my resume the rest of my life.”

His murky and vague responses to questions about steroid use lasted for about another year until he finally came clean to the Los Angeles Times in 2010, saying that he had used HGH to deal with knee issues.

A few days before the Mitchell Report was released, Gagné signed a deal with the Milwaukee Brewers to become the team’s closer. It was, as the French say, tres mal. Gagné only had ten saves and was eventually replaced as closer. The 2008 season would be both Gagné’s worst statistically and his last professionally. He would be released by the Brewers in the middle of spring training in 2009.

Eric’s Gagne’s Life After The MLB

After his release from the Brewers, Gagne first headed north to play and coach for the Québec Capitales of the Can-Am League, one of several independent baseball leagues out there. After helping the team win the league championship, Gagné returned to the Dodgers, signing a minor league contract. Unfortunately, it never became a major league contract and on April 18, 2010, he announced his retirement.

And that was that, right?

After his stints in the Cam-Am League, Gagné thought it was time to take another crack at returning to Major League Baseball, and in May 2017, he signed a deal with the Long Island Ducks of the Atlantic League of Professional Baseball.

The move did not translate to a return to the majors and Gagné again announced his retirement from professional baseball on May 21, 2017.

During the 2010s, Gagné was not just busy angling for a return to the majors. He was also coaching. Gagné coached the French national team first at the 2013 World Baseball Classic (they didn’t make it out of the qualifying round), then in the 2014 European Championships (they finished sixth), and again at the 2016 World Baseball Classic Qualifiers (they again failed to qualify).

In 2018, the Rangers organization brought Gagné on board as a pitching coach for the Arizona League Rangers, the team’s rookie-level squad. The following year, Gagné was made the bullpen coach of the team’s AAA Pacific Coast League team, the Nashville Sounds, an appointment that lasted for one season before he was released.