What Happened To Nomar Garciaparra? Here’s A Look Back At The Star Shortstop’s Career 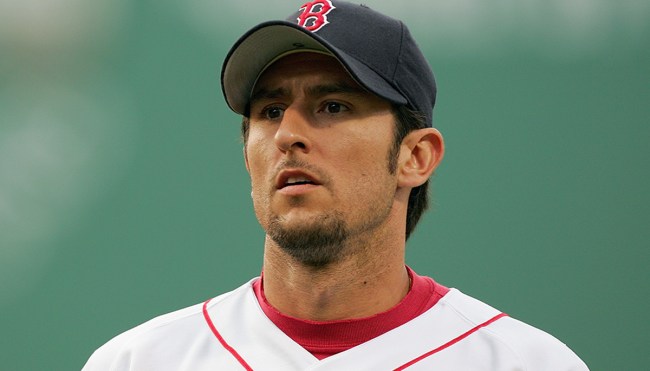 The Boston accent has strange powers. It can annoy you and it can make you laugh. It can be butchered by incredibly talented actors but sound amazing on the evening news. Some love it. Some hate it. Some could not care less. However, you also can’t talk about the Boston accent without discussing the often overlooked role it can play in how some professional athletes are received in the city.

It goes without saying that the best way to find yourself in the good graces of fans in Boston is to be really good at whatever sport you play. However, anecdotal evidence has shown there’s another quality that comes in handy when it comes to ensuring you’ll be embraced with open arms: having a name that sounds wicked awesome with that wicked awesome Boston accent.

There is nothing Bostonians love more than cheering for a player who really lets them drop those “r’s” and stretch out the “ahs.” If you need proof, I would direct you to some recent members of the Red Sox roster like Kyle Schwaber (Schwabah), Dustin Pedroia (Pahdroyah), Alex Verdugo (Vahdoogo,) and Xander Bogaerts (Bogahts.)

However, none of them embody the symbiotic relationship between the Boston accent and an athlete’s moniker quite like Nomar Garciaparra—or, more accurately: NOMAAAAAAAAH!

Based on the résumé he put together while playing for the Red Sox, it’s safe to assume the shortstop would’ve been just as beloved if he’d been born with a name like “Ralph Jenkins.” as NOMAAAAAAAH was an amazing baseball player during his time in Boston.

Garciaparra was Rookie of the Year, a six-time All-Star, won two batting titles, is one of only 13 players in baseball history to hit two grand slams in one game, and retired with a .313 average. He came to the Red Sox as a first-round draft pick in the late 90s and helped steer the franchise in the direction that would eventually lead them to the team’s first World Series in 86 years in 2004.  All of that was great, but in my personal opinion, nothing was quite as great as yelling out “NOMAAAAAAAAHH” while watching a Red Sox game.

Sadly, like all good things, that had to come to an end. Garciaparra didn’t finish his career with the Red Sox (he wasn’t even on the team when they broke the Curse of the Bambino), as he was famously traded to the Chicago Cubs in the middle of the 2004 season. The BoSox added two players who would become crucial members of that championship squad in return, and Garciaparra set off down a path of being yet another baseball nomad before finishing his career with the Oakland Athletics in 2009.

From there…actually, this is an article about what happened to him, so let’s settle in, grab a cup of chowdah, a few Sam Adams, and dive in. 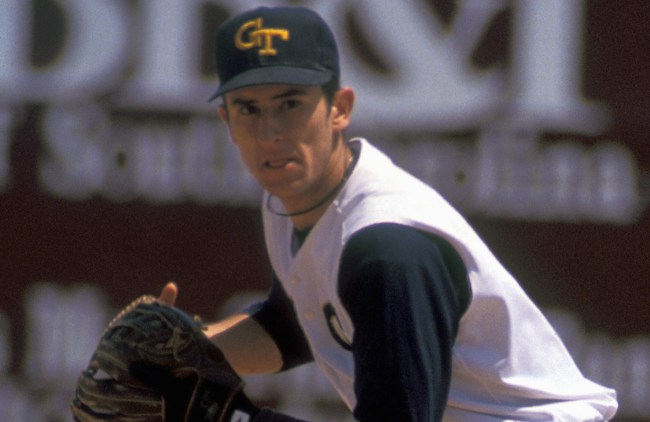 Despite how it may have looked when he was playing at the peak of his powers, Garciaparra was not created in a lab to play baseball. He was, in fact, born in Whittier, California, where he was legally dubbed Anthony Nomar Garciaparra (the middle name he’d adopt as his primary moniker is a reference to his father Ramon—yes, because “Nomar” is “Roman” backward).

Ramon Garciaparra was instrumental in his son becoming the great player he would become. He was especially keen on getting Nomar to avoid striking out, going so far as to offer a financial incentive: his son would earn twenty-five cents for each hit he recorded, but was also fined fifty cents for each strikeout. The younger Garciaparra would become such a machine that he was given the nickname “No Nonsense Nomar,” which both sounds like a children’s book and also sounds significantly less cool than NOMAAAAAAAAH.

After making a name for himself in high school, Garciaparra was drafted by the Milwaukee Brewers in 1991 but elected to head south and enroll at the Georgia Institute of Technology (which most people refer to as “Georgia Tech”). While there, Garciaparra led the Yellow Jackets to the College World Series in 1994, where they ultimately lost to Oklahoma. In his final season in Atlanta, Garciaparra hit .427. Whether or not he was still collecting money from and handing over fines to his father at this time is unclear, but I like to think that remained the case until he retired.

Garciaparra also spent a summer on Cape Cod playing in the legendary Cape Cod Baseball League, winning a championship with the Orleans Cardinals in 1993. 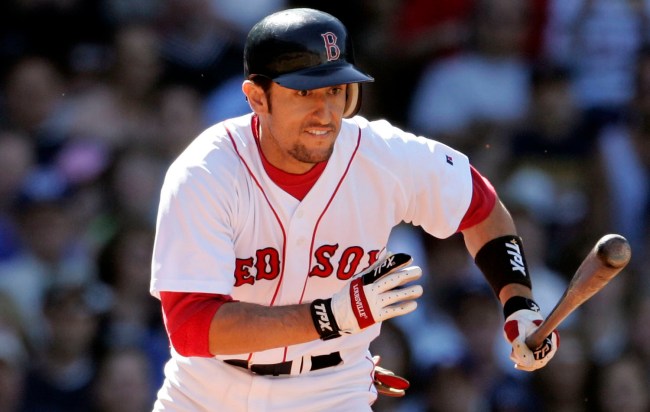 NOMAAAAAAHH ended up in Boston in 1994 when the Red Sox scooped him up with the twelfth pick in the first round of the draft. Before making his MLB debut, he had to make his way through the Red Sox farm system, but unlike his routine at the plate (which any Red Sox fan will tell you took forevah), Garciaparra quickly worked his way up the ranks before playing his first game as a pro on August 31, 1996. He recorded an out in his first and only appearance in that contest, but the following day, he posted three hits—including his first career home run.

The 1997 season was Garciaparra’s coming-out party. In 153 games, the star shortstop had 209 hits, 30 homers, 98 RBI, and posted a batting average of .309. In addition to the aforementioned Rookie of the Year award, he was named to the All-Star Team and finished eighth in the voting for American League Most Valuable Player. He was even better the next year, raising his average to .323, collecting 122 RBIs, and hitting 35 dingers (he finished second in the AL MVP voting behind Juan Gonzalez of the Texas Rangers).

In the spring of 1998, Garciaparra signed a five-year contract worth $23.25 million. Over the next few seasons, he continued to produce as Red Sox fans grew increasingly optimistic about the future of a team that made the playoffs in 1998 and 1999 on the back of their clutch infielder and ace starter Pedro Martinez.

The enthusiasm continued to grow when Boston added Manny Ramirez to the mix ahead of the 2001 season, but it quickly dampened when Garciaparra aggravated in an old wrist injury, forcing him to start the season on the disabled list (there were also rumblings of steroid usage following a shirtless Garciaparra appearing on the cover of Sports Illustrated).

After playing just 21 games that year, Garciaparra bounced back. While his power numbers dipped slightly, he appeared in 156 games in 2002 and 2003 and hit over .300 in each campaign. As Red Sox fans know all too well, that second one ended in heartbreak for the team, as they lost to the New York Yankees in a heated American League Championship Series courtesy of a walk-off homer by Aaron [Expletive Deleted] Boone.

The following offseason was an intense, weird, and rocky one in Boston as the Red Sox looked to make moves that would finally get them over the hump and past the Yankees. They explored trading Ramirez to the Rangers for Alex Rodriguez, which would have led to them also sending Garciaparra to the Chicago White Sox for Magglio Ordóñez.

Word about that potential move got out, and Garciaparra did not take kindly to it. To make matters worse, the proposed Ramirez/A-Rod deal fell apart, and while I’d like to tell you everyone put on a brave face and moved forward on Yawkey Way, that definitely did not happen.

Garciaparra was again bothered by an injury heading into the season and wouldn’t take the field until June. Upon returning, his offense was still there but his defense was starting to slip, which became a sore point for Red Sox General Manager Theo Epstein. On top of that, Garciaparra required multiple days off so as not to reinjure himself.

The Red Sox would go on to win the World Series that year. It was awesome. 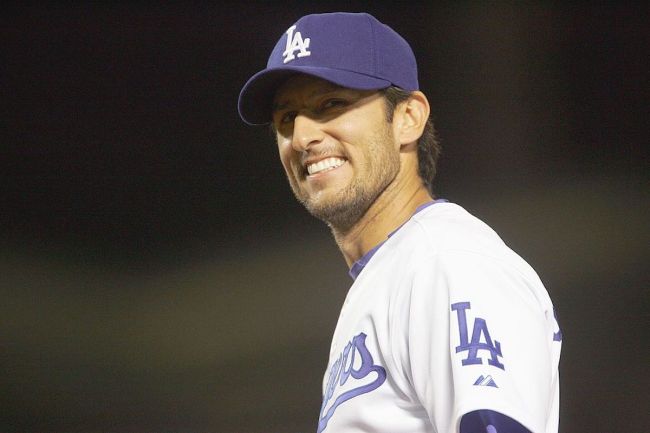 Garciaparra’s career didn’t end after the Red Sox traded him away, but he was never really the same. For starters, his name wasn’t nearly as fun to say in a Chicago accent, let alone a southern California accent or a Bay Area one.

After two disappointing seasons in Chicago, Garciaparra headed west in 2006 and signed with his hometown team: the Los Angeles Dodgers. While with the Cubs, Garciaparra dabbled in playing third base, and after arriving in L.A., he moved across the diamond to first base (a position better suited to his evolving physical limitations).

Garciaparra had his best offensive season in Los Angeles in his first year there, as he played in 122 games (the most he’d played since 2003) and hit .303 with 20 home runs and 98 RBIs. He was also named to the National League All-Star team and finished 13th in MVP voting.

The 2006 season was essentially Nomar Garciaparra’s last stand, as his numbers began to slip again the following year. He signed a one-year deal with the Oakland A’s in 2009, where he appeared in 65 games. The highlight of the season may very well have been in July when Garciaparra returned to Boston for the first time as a member of the opposing team.

In March of 2010, NOMAAAAAHH again returned to Boston, signing a one-day contract with the Red Sox and retiring as a member of the team.

What Did Nomar Garciaparra Do After Retiring? 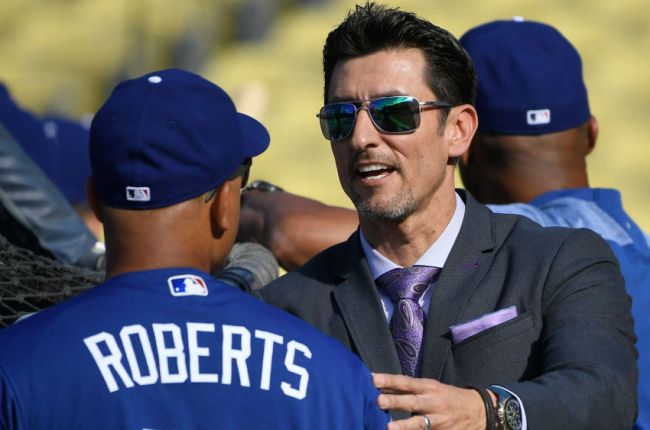 Following his retirement, Garciaparra headed south to Bristol, Connecticut, where he started working as a baseball analyst for ESPN. He covered both the pros and the college game, serving as a lead analyst for the network’s coverage of the College World Series.

A West Coaster at heart, Garciaparra returned to California in 2013. The following year, he got a gig calling games for the Dodgers and also became a minority investor of the MLS club Los Angeles FC. The move was a natural one for Garciaparra, who, in addition to baseball, had grown up playing soccer and married the legendary Mia Hamm in 2003.

The couple is currently raising their three kids together in Southern California.