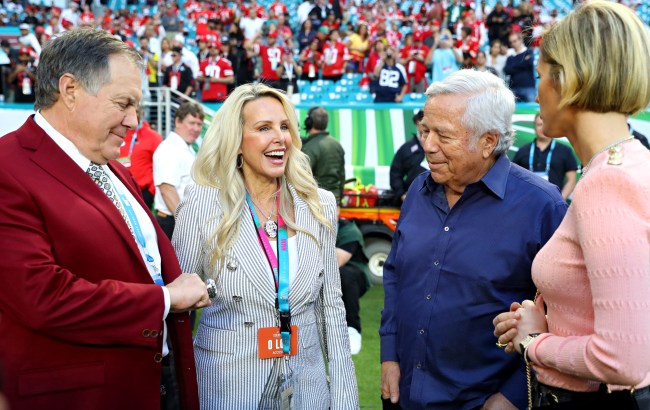 And he is not afraid to let people know about that or the fact that he has eight Super Bowl rings in total.

As a result of Belichick’s unprecedented success, there are certain fans (everyone outside the New England area) who don’t appreciate his achievements (they hate him).

So when he was introduced as one of the greatest coaches during the NFL’s 100th season celebration prior to Super Bowl LIV and was met with a chorus of boos, he took that moment to remind everyone that he is better than them by flashing the three Super Bowl rings he was rocking for the ceremony.

Not gonna lie, this was a pretty baller move by Bill Belichick pic.twitter.com/DAKRSVYSlQ

So, of the eight Super Bowl rings The Hoodie owns, which three did he choose to wear for this once in a lifetime event?

One ring was the Super Bowl XXI ring that Belichick won in 1987 as defensive coordinator of the New York Giants. Simms knows this because his dad, former Giants quarterback Phil Simms also owns one.

Another one of the rings was from the New England Patriots’ sixth Super Bowl win last year, the 13-3 victory over the Rams in Super Bowl LIII.

The third ring, however? That one is more of a mystery.

Simms says it is not a Patriots ring and and Belichick’s people aren’t talking.

Boston radio station 98.5 The Sports Hub did some serious research and they believe it was Belichick’s other ring from the Giants the he received after New York’s 1991 victory in Super Bowl XXV.

They believe this because Giants great Lawrence Taylor auctioned off his Super Bowl XXV ring in 2012 and it looks extremely similar to what Belichick was wearing.

And even if they’re wrong, one thing is certain, it was definitely an all time flex. Right, Gronk?