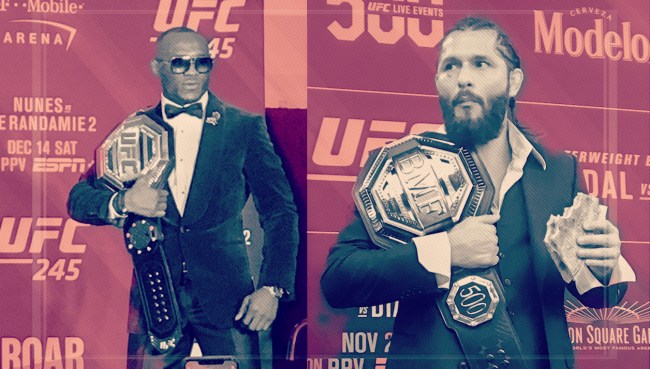 With the whole combat sports space stuck in a stupor after last week’s Jake Paul vs. Ben Askren shenanigans, it’s time to escape the Snoop-size cloudy haze and get ready for some massive fights in the Octagon this Saturday, when the UFC is set to deliver three championship bouts at UFC 261 (April 24, 7 p.m. PST / 10 p.m. EST, ESPN+ PPV) , including a headlining rematch between welterweight champion Kamaru “The Nigerian Nightmare” Usman and BMF champ Jorge “Gamebred” Masvidal.

It’s bound to be a killer night of fights.

Beyond the Usman vs. Masvidal fight, which is a rematch from their “Fight Island” blockbuster last July, UFC 261 has two equally, if not more, intriguing title fights on the card, with flyweight champion Valentina “Bullet” Shevchenko taking on former strawweight champ Jessica Andrade, and current 115-pound champion Zhang Weili returning to the Octagon for the first time since UFC 248, set to take on former champ Rose Namajunas.

With less than 48 hours to go until fight night, it’s time to examine the UFC 261 fight card, the major stories, and the odds. Keep reading for all the finer points. Or just click the link below and order UFC 261 on ESPN+ because honestly, those three fights alone are worth the price of admission for this slamming Pay-Per-View affair.

UFC hardcores were quite surprised to see BMF champ Jorge Masvidal earn the immediate rematch against Kamaru Usman following a fairly one-sided contest last July, when “The Nigerian Nightmare” dominated the action, relying on his pressure game and control in the clinch.

It honestly wasn’t the most competitive or exciting fight, but given that the last bout, which sold roughly 1.5-million Pay Per View units, was put together on just six days notice, the UFC has rebooked Usman against Masvidal, this time giving both fighters ample time to train and game plan.

For this rematch, Usman has vowed to finish Masvidal inside the distance, something that has never happened in the UFC. The last time Masvidal was finished in a professional fight was in May 2009 — three and a half years before Usman made his professional MMA debut — so Usman will need to land his heavy jab early and often to keep Masvidal on the back foot.

Then again, Masvidal basically never takes a step back in any fight.

Masvidal has a real opportunity to bring a different gameplan to this rematch against Usman. Stylistically, he has some major disadvantages in the offensive wrestling department; however, Masvidal has incredible takedown defense, having stuffed roughly 11 of Usman’s takedown attempts in the last fight. Statistics like that are super necessary to highlight, given that they can have a major impact on the rematch.

Personally, I’m predicting this second fight to have way more action than the first.

For starters, both fighters are familiar with each other, which means they already have some pre-existing understanding of the physical strength, range, and tendencies. The full training camp for Masvidal will also have a major impact on the rematch, especially considering that “Gamebred” took the first round of the last fight.

Another factor is Usman’s desire to knock Masvidal out.

With an amazing jab and ever improving boxing, Usman will be looking for the finish on the feet, which means he may play into Masvidal’s setups and traps a bit more, and this is a perfect recipe for action.

No doubt the sequel will be better than the original.

Is another Fight of the Year on deck? 🏆

I’ll be the first to admit my bias towards the Chinese fighters in the UFC. I used to promote MMA fights in mainland China after all, so strawweight champion Zhang Weili has been on my radar for years.

What wasn’t on my radar though, was the Fight of the Year she delivered last year, when she beat Joanna Jędrzejczyk in an instant classic.

A winner of 21 straight fights, including five in the UFC, Zhang Weili has quickly become one of the most impressive fighters in the Octagon. Her power and explosiveness have proven to be second to none at 115-pounds, but former champ Rose Namajunas will have plenty to say about that at UFC 261.

Namajunas is a formidable striker in her own right. She’s a slick kickboxer with some super creative and impressive submission skills to boot, and is looking to reclaim the title she lost in 2019, after suffering a nasty knockout via slam.

Normally quiet and compassionate, Namajunas made headlines last week, when she attacked Zhang’s beliefs and politics as a Chinese national. Using the phrase “better dead than red,” Namajunas went all in on the champ in an attempt to bring more attention to the fight.

So, what was already an incredible matchup on paper, now carries the tinge and taint of some good old capitalism vs. communism rhetoric. Sign me up for some of that!

Just How Competitive Will Jessica Andrade (+365) Be Against Valentina Shevchenko (-460)?

Nicknamed “The Bullet,” Shevchenko is as fast and explosive as the moniker suggests, delivering perhaps the most technically perfect striking in mixed martial arts today.

Shevchenko is, according to many pundits, the most dominant champion in the UFC at the moment. She’s so far ahead of the competition that the UFC has been building the division around her, looking for competitive challengers, even importing ex-champs from other divisions, which is exactly how Jessica Andrade ended up here, fighting for a second title after briefly holding the strawweight strap in 2019.

While Shevchenko is a deserved favorite in this one — she’s bigger, taller, and longer, with impeccable striking, distance management — Andrade is the toughest test she’s faced at 125-pounds, in large part because of her experience, style, and power.

Having competed at both 135 pounds and 115 pounds, Andrade has finished opponents in three different weight classes, in large part because of her heavy and powerful hands.

If she can get in close, she can make it a dirty fight. But that’s a very big “if” considering just how good Shevchenko is.

Stylistically, this is a fun fight because Andrade must bring the pressure and force the action if she’s going to have any chance to win the fight. This will leave holes for Shevchenko to exploit, employing some picturesque counter striking … and that’s where crazy finishes come from.

You know the deal here: You can’t rate the card until it’s over.

However, on paper, the UFC 261 main card, which also includes a bout between former middleweight champion Chris Weidman (-125) and surging contender Uriah Hall (+105), a decade after they last fought, along with a light heavyweight bout between former title challenger Anthony Smith (+165) and rising prospect Jimmy Crute (-190), is a gem of a card.

It’s not often that the UFC puts three title fights on a card (although that’s sort of becoming a bi and tri-annual thing these days), so this is easily one of those fight cards you just can’t miss. Just make sure to stock the fridge and prepare a feast, because this is bound to be a long night of fun and wild fights.