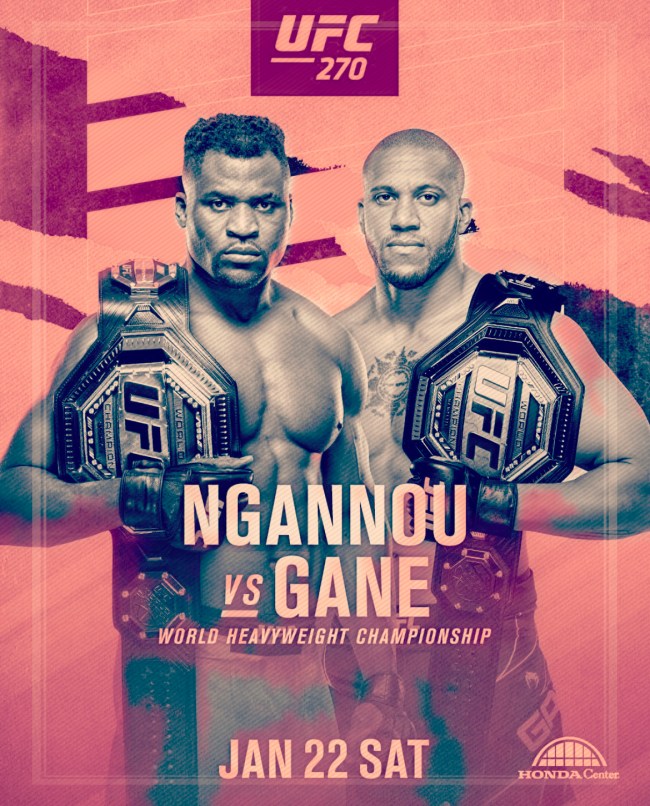 Big stakes this weekend at UFC 270. Quite literally the biggest stakes there are in mixed martial arts because the UFC heavyweight title is up for grabs on Saturday night, as reigning champ Francis “The Predator” Ngannou will attempt to defend his title against former training parter, and interim heavyweight champion, Ciryl “Bon Gamin” Gane.

It’s an incredible main event to be honest, with Ngannou and his otherworldly power going up against Gane’s spectacular technical prowess. The UFC 270 (January 22, 7 p.m. PST / 10 p.m. EST on ESPN+ PPV) main event really is unlike any matchup we’ve ever seen in the Octagon. Just thinking about it raises my heart rate a few beats per second.

The matchup between Ngannou and Gane, which some are calling the best heavyweight title fight in UFC history on paper, is just one of several important storylines that will pan out at UFC 270; however, it is the biggest. Coincidentally, the UFC’s lightest male title is also on the line at UFC 270, as flyweight champion Brandon Moreno takes on former divisional king Deiveson Figueiredo for the third time in an equally fascinating, albeit drastically different, fight.

So, with just a few days remaining until UFC 270 fight night, it’s time to dissect the first UFC PPV card of 2022.

All due respect to greats like Randy Couture, Cain Velasquez, Brock Lesnar, and Stipe Miocic, all of whom wore UFC heavyweight gold, but this UFC 270 PPV main event between Francis Ngannou and Ciryl Gane may very well be the best heavyweight matchup we’ve ever seen.

Ngannou, who has been knocking dudes senseless in the Octagon since 2015 and is set for a cameo in the upcoming Jackass Forever, is a complete force of nature. Once compared to a Ford Escort (UFC President Dana White likened Ngannou’s power to the American-made sedan), Ngannou won the heavyweight title last March, absolutely smoking then-champ Miocic. It’s kind of par for the course for “The Predator,” though, considering that he’s needed all of 8 minutes and 34 seconds to knock out his last five opponents, combined.

With dynamite in his massive hands, and the speed and athleticism to boot, Ngannou is a force of nature, and unlike any fighter we’ve ever seen before. But, so is Gane, honestly.

Technically brilliant and fundamentally sound, Ciryl Gane is a special athlete with an incredible kickboxing game. As displayed in his interim heavyweight title win over Derrick Lewis at UFC 265, Gane is always bouncing on his toes, never flat footed. The agile and elusive Gane moves like a lightweight, throwing combinations with devastating accuracy. Oh, and he’s not just a rangy fighter. “Bon Gamin” can beat you up up close, in the clinch, using a bevy of knees and elbows.

The matador to Ngannou’s bull, Gane moves unlike any heavyweight before him. He’s slick and sophisticated, athletic and aware. And, while he’s predominantly a kickboxer, he also has a competent ground game, although we probably won’t see it on Saturday night.

As always, it’s impossible to really predict how a fight will play out before the bell rings, but all expert analysis points to a fight that’s akin to the irresistible force paradox. You know, that whole “what happens when an unstoppable force meets an immovable object” thing.

And, in the case of the UFC 270 PPV main event, the results will, no doubt, lead to an epic fight.

As excited as everyone is for the UFC 270 main event, it’s the co-main event – a trilogy bout between flyweight champion Brandon Moreno and rival Deiveson Figueiredo – that has the real hardcores foaming at the mouth.

Roughly 13 months removed from their first bout, which ended in a draw and was named on of the top fights of 2020, Moreno and Figueiredo enter UFC 270 on drastically different ends of the spectrum.

With Moreno winning the re-match last summer, claiming the title via rear naked choke, it’s time to see if Figueiredo can re-claim the belt. Historically, however, it’s been very difficult for former champions to climb the mountain a second time.

Moreno, a former contestant on The Ultimate Fighter who was once cut from the UFC roster, has become one of the most likeable athletes on the UFC roster. His affinity for Legos and nice-guy attitude have resonated with the fan base. And then there’s his Brazilian Jiu Jitsu prowess, which has proven to be extremely slick and effective.

Looks are deceiving though. Moreno doesn’t necessarily strike anyone as an intimidating force, so when he steps in the Octagon and dazzles with miraculous displays of heart and grit, it feels surprising, although it shouldn’t be. He’s a highly trained and skilled athlete.

So is Deveison Figueiredo for that matter.

A decorated former champion, Figueiredo held the flyweight title for 11 months from 2020-21. During that time, he developed a reputation as one of the nastiest and most violent fighters in the UFC.

Enormous for the 125-pound division, Figueiredo bullies opponents with his size and power, landing heavy strikes before dominating on the ground.

Figueiredo clearly met his match in Moreno, but there’s another opponent he’s always fighting: the scale.

Making weight has always been an issue for Figueiredo. And although he’s only officially missed weight on one occasion, it was for a title fight, so it’s always part of the narrative.

Regardless, he appears to be in phenomenal shape for UFC 270, preparing with former flyweight champ and Olympic gold medalist Henry Cejudo. And, so long as he doesn’t gas out, Figueiredo looks like he’s ready for revenge.

How About Some Bad Blood

Both the UFC 270 main and co-main events have their fair share of bad blood.

For Ngannou and Gane, it centers on their relationship as former training partners at the MMA Factory in Paris. With Ngannou falling out with head coach Fernand Lopez, and later defecting to Extreme Couture in Las Vegas, Gane became the new top dog at the gym.

In response, Lopez went public, airing heaps of dirty laundry. He also went on record to state how Gane is the next evolution of a heavyweight mixed martial artist. Of course, it’s because he believes it, but there’s also tension between Ngannou and the entire gym. And, for his part, Ngannou famously snubbed Gane and Lopez backstage at UFC 268, later declaring Gane to be “a joke.”

In the co-main event, Brandon Moreno has been branded as a “traitor” by Figueiredo and his entire team. The heat really derives from Cejudo though, a Mexican-American who has long been salty that Moreno, a Mexican national, chose to train with the now-retired Joseph Benavidez ahead of The Ultimate Fighter season 24 finale.

It’s still unclear if this beef is for real, but Figueiredo has already been playing it up in interviews, and the storyline will most definitely present itself during fight week.