UFC 264 Preview: Is Poirier vs. McGregor the Biggest Trilogy in UFC History? 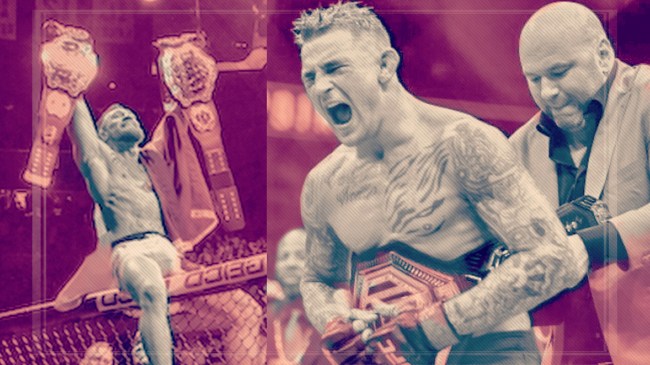 Whenever he steps foot in the Octagon, “The Notorious” Conor McGregor sets records.

McGregor is a numbers machine, breaking gates and fight purse figures with every ensuing bout, so it’s no surprise that he’ll add “Biggest Trilogy in UFC History” to his resume after his PPV main event against Dustin Poirier at UFC 264 (July 10, 7 p.m. PST / 10 p.m. EST on ESPN+).

But why is UFC 264 the biggest trilogy in UFC history? What qualifies Poirier vs. McGregor 3 over trilogies between Couture and Liddell, St-Pierre and Hughes, Edgar and Maynard, and Velasquez and Dos Santos?

Well, it’s mostly the sales figures, honestly, which Dana White is already predicting moving somewhere between 2-3 million PPV units. But, UFC 264 has several other distinctions, so read on and prepare for the biggest fight of 2021 and the biggest trilogy in UFC history.

A Bit On the UFC’s Greatest Trilogies

Before we dive into the Poirier vs. McGregor fight, it’s important to discuss the other great trilogies in UFC history. There have been some pretty epic ones.

With former heavyweight champions Stipe Miocic and Daniel Cormier recently completing their three-year-long trilogy in 2020, rivalries have always been a big part of UFC matchmaking.

Take the light heavyweight trilogy between Randy Couture and Chuck Liddell. With Couture surprising Liddell in the first fight — which was for the interim light heavyweight title — via third-round TKO, Liddell came back and won the second two bouts, both of which were for the undisputed belt at 205 pounds, via knockout.

Similarly, welterweights Georges St-Pierre and Matt Hughes fought on three occasions, once for the interim title, and twice for the undisputed strap. While Highes submitted St-Pierre in their first bout, GSP knocked Hughes out and submitted him in the next two contests. It was easily the biggest trilogy in welterweight history.

Up at heavyweight, former champions Cain Velasquez and Junior Dos Santos put on a pretty massive trilogy between 2011-2013. All three fights were for the undisputed heavyweight championship, with JDS knocking Cain out in a little over a minute in the debut UFC on FOX show. Velasquez would take the next two via all out destruction, winning a bloody and dominant decision to get his belt back, and eventually earning a fifth round stoppage in another one-sided affair.

All of these fights were enormous, all of these trilogies are part of the UFC’s rich history, but somehow, this McGregor vs. Poirier trilogy feels even bigger.

The Impact of McGregor vs. Poirier

Okay. So by now you’ve probably been able to ascertain that the McGregor vs. Poirier is the biggest trilogy in UFC history because it will be seen by more people than any of the others. The Poirier-McGregor trilogy will just make a bigger impact in the sporting world than the others, even if none of the fights are for a title. It’s really quite bizarre.

Take the previous biggest UFC trilogy in the lightweight division: Frankie Edgar vs. Gray Maynard. With Maynard winning a decision in the first fight, Edgar would eventually go on to win the lightweight title years later. With one title defense under his belt, Edgar would welcome a rematch, this time for the belt. The second fight ended in a draw, prompting the trilogy bout, which Edgar won via knockout.

Two straight title fights cemented Edgar vs. Maynard as a massive trilogy, and yet Poirier and McGregor, for no belts or titles ever, still feels big. That’s really a testament to the growth of the UFC over the last decade, but it’s also an effect of McGregor’s massive celebrity, and his ability to make his rivals rich and famous as well.

Whereas Poirier was widely unknown outside the MMA bubble when he fought McGregor at UFC 178, his name built steadily as he made his way to the interim title and a PPV headlining bout against Khabib Nurmagomedov at UFC 242. Dustin Poirier was right on the cusp of stardom when he signed on to fight Conor McGregor at UFC 257, and after knocking “The Notorious” out in the second round, Poirier has become recognized outside the fighting faithful. He’s transcended beyond MMA, earning big sponsorship deals and commercial placements.

It’s quite similar to how Nate Diaz parlayed his success against McGregor into BMF title fights, headlining bouts in front of former President Trump at Madison Square Garden, and his own niche in the commercial CBD space. Although, Diaz’ brand and name were a bit more established than Poirier’s prior to choking Conor out at UFC 196.

More on the McGregor vs. Poirier Trilogy

When Poirier and McGregor first fought at UFC 178, it was as a featured bout, third down from the top of a card headlined by Demetrious Johnson and Chris Cariaso. The PPV would go on to sell a reported 205,000 units.

It’s far from the worst figure in UFC history, but it’s a far cry from the seven figure PPV buys that McGregor vs. Poirier 2 did at UFC 257. The UFC 264 PPV main event on ESPN+ is expected to do even bigger numbers.

St-Pierre vs. Hughes reportedly managed to break 500,000 buys on two occasions, while Couture vs. Liddell reportedly sold north of 400,000 PPVs for their second two fights. Then there was Velasquez vs. Dos Santos, which was seen by 8.8 million viewers on FOX before selling a reported 590,000 PPVs in their second fight. All of these numbers are super impressive by any stretch of the imagination, and yet none of them come close to McGregor vs. Poirier. Not even close.

So, is McGregor vs. Poirier a huge fight because it will sell big? Or will it sell big because it’s a huge fight? It’s kind of tough to say, especially when there are no titles on the line. And yet there are stakes, big stakes.

But what we do know is that a Conor McGregor fight is bigger than any title fight. And, depending on the outcome at UFC 264, a Dustin Poirier fight may just become bigger than championship bouts as well.

Then again, Dana White has already said the winner of the UFC 264 PPV main event on ESPN+ will fight Charles Oliveira for the lightweight title next, so the point is kinda moot.