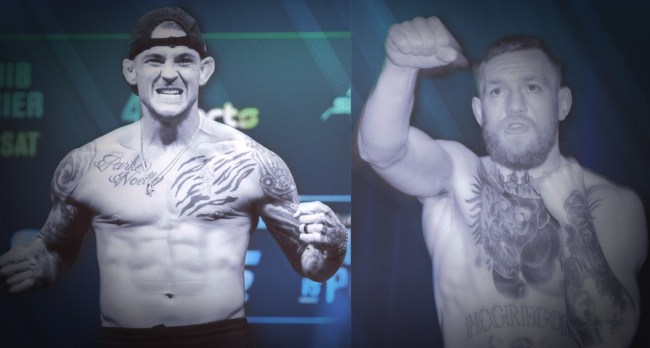 Presented in partnership with UFC 264 via ESPN+

Big shift at the moneyline over the weekend. Conor McGregor is officially listed as the underdog for his trilogy bout against Dustin Poirier, this Saturday (July 10, 7 p.m. PST / 10 p.m. EST on ESPN+ PPV) at UFC 264.

While those odds still may change in the leadup to fight night, the game plans will not. By now, both McGregor and Poirier know exactly how they intend to finish the other. Both of them have done it in the past, so visualizing victory should be simple. Executing it, however, will be a bit more tricky when Conor and Dustin are finally locked inside the Octagon for the third time.

Despite their lengthy rivalry, which dates back to 2014, McGregor and Poirier have, in actuality, shared less than 10 minutes of cage time. They’ve felt the other’s power and dished out their own, but there are so many more possible outcomes to this intriguing stylistic matchup. So many more that I’m convinced this will be the best fight of the Poirier vs. McGregor trilogy. No doubt.

So, with that in mind, let’s dive into the fight and examine the techniques and paths to victory.

There. I said it out loud. “The Notorious” Conor McGregor has never been the same fighter since he captured the featherweight and lightweight titles and went off to box Floyd Mayweather.

This is not some cheeky editorial on his life outside competition. It’s just an observation that since he decided to rebuild his frame for boxing, Conor has never quite fought in the same style that propelled him to international fame and multiple titles.

Back when Conor beat Poirier in 2014 at UFC 178, all the way through his title run, he used so much more movement and a wider karate stance. His mid section was narrower and shoulders broader. He was a different fighter altogether honestly, and would come out and try spinning heel kicks right out the gate just to dominate the Octagon and the flow of the fight. It was mastery, honestly.

"I'm not a businessman. I'm a business, MAN" –@TheNotoriousMMA

Most of the time it worked, but on one occasion, against Nate Diaz at UFC 196, it didn’t. Still, Conor continued his use of movement techniques, mixing the flow between karate, boxing, and clinch work. He was so hard to read, and lightning quick.

Then he completely changed everything, reshaping his body with a girthier midsection to absorb Mayweather’s punches. And the changes, to his frame and in his style, have not produced the best results.

See, Conor needs to finesse Dustin in the trilogy fight at UFC 264, rather than attempt to bully “The Diamond” as a boxer. If he plays that game, he’ll leave his lead leg overexposed to the calf kicks that did him in last time around.

Instead, Conor needs to use that wider stance and those capoeira type kicks to create distance early on. If he can use his length to change the striking game, making use of long punches, rather than tight shots up close, he can find a way to land that deadly left without taking too much punishment from Poirier.

There are other articles in this UFC 264 preview series where we highlight the PPV main event on ESPN+ from different angles, talking more about the story of McGregor and Poirier and how their fighting careers are intersecting to dominate the MMA storylines in 2021. But this article is purely analytical, so we can not over, or under, state that Dustin Poirier is a more well rounded fighter than Conor McGregor. He demonstrated that at UFC 257 in January, when he used wrestling, clinch work, and clever striking (both kicks and punches) to finish McGregor in the second round.

A legit black belt in Brazilian Jiu Jitsu with a proven submission game, Poirier has shown he can wrestle. He knows all the tricks of the trade, which is why he didn’t buckle under pressure when McGregor caught him with a heavy jab in the first round at UFC 257. He’d already lived that scenario once before, at UFC 178, when he folded under McGregor’s heat. But the second time around, Poirier combined his nasty MMA arsenal with the veteran’s savvy he acquired during a decade with the UFC. The extra 10 pounds didn’t hurt him either.

See, while McGregor’s move up to lightweight included a complete reshaping of his midsection, Poirier took the slow path up the lightweight chain. The slow build actually allowed him to become a better fighter at 155 pounds, learning how to best utilize his natural advantages and frame.

As a lightweight, Poirier is a bully in the Octagon. He can take damage and withstand pressure in the pocket, delivering numerous Fights of the Night. And that’s probably his best bet against McGregor, but only after employing the takedown game and top control to wear Conor down a bit.

While Poirier possesses knockout power, the one hitter quitter isn’t really his biggest threat. His striking is maximized in close quarters, putting opponents in terrible positions where the referee eventually needs to intervene. And, he’s able to catch guys in these spots because he drags them into deep waters.

The gameplan should be no different against McGregor at UFC 264. Make it a dog fight early and look for the takedown. It won’t come right away, but Poirier’s savvy enough to make it dirty against the cage. Then again, now that he already knows the calf kick works, why not use it again?

Well, McGregor won’t be so foolish to leave himself exposed in that way again.

The In-Between Spaces: Poirier vs. McGregor 3 Will Be Dirty

Given that McGregor and Poirier know each other so well, they also know there’s more to this fight than the outcomes of the first two. They both believe they can win, and they both know they need to be prepared for a completely different fight.

For Poirier, on the other hand, he needs to keep it close, while at the same time allowing McGregor moments of space only to capitalize on range.

The question is, who can dominate the in-between spaces?

If Conor and Dustin end up clinched against the cage, or on the mat, who can force the scramble, and who can land punches when the clinch is broken? That’s who will be able to impose their will.

Unfortunately for this technical breakdown, it’s actually heart, grit, and fight IQ that often override at these times, giving some fighters the edge. So, for all the tactical moves McGregor and Poirier throw into their gameplans, it’s likely that their heads and hearts that will determine victory at UFC 264.

It’s gonna be wild, for sure.