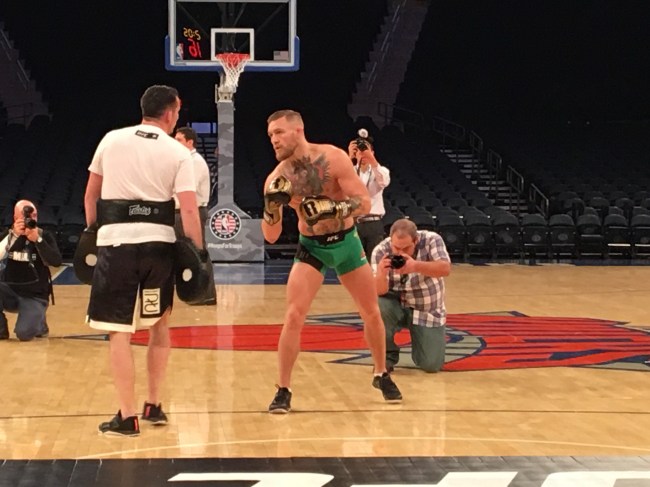 by Dan Shaprio for BroBible

One of the biggest mysteries surrounding the upcoming UFC 246 main event between “The Notorious” Conor McGregor and Donald “Cowboy” Cerrone is the stipulation that the fight take place at welterweight.

When the fight was first announced, this one key piece of information stood out for a number of reasons, namely, from the outside, it didn’t seem like the contracted weight would benefit McGregor as much as a fight at 155 pounds, where he won a title and seems to be able to maximize all of his physical gifts and natural advantages. Instead, a fight at 170 pounds, where “Cowboy” collected six finishes between 2016-2018, seems to swing some favor in Cerrone’s direction.

So why then, Conor McGregor, why is this fight taking place at welterweight?

If you listen to UFC president Dana White, the UFC 246 PPV main event on ESPN+ between McGregor and “Cowboy” is essentially a lightweight fight being contested without a weight cut. To hear McGregor say it another way, he’s saving his weight cut down to 155 pounds in case either Tony Ferguson or lightweight champion Khabib Nurmagomedov withdraw from their upcoming showdown at UFC 249.

There are ample, and still oddly vague, reasons for McGregor to take this UFC 246 fight at 170 pounds, but a big reason is to save his body from the extreme measure of MMA training, and weight cutting.

Taking nearly a year to rebuild his physical shape and form from the MMA shape that led him to a pair of world titles, “The Notorious” developed his McGregor Fast conditioning system while preparing for his 2017 boxing match-turned-spectacle against Floyd Mayweather. It was during his camp for the Mayweather fight that McGregor increased his size and strength across the midsection to better handle the body shots that he’d undoubtedly absorb during a boxing match.

Will @TheNotoriousMMA bring Vegas to its feet once again!? 🇮🇪 #UFC246 pic.twitter.com/nI3oAnvbHy

The McGregor Fast showed immediate results, as McGregor went 10 rounds in his pro boxing debut, taking on one of the greatest boxers of all time.

With boxing in the rearview mirror, McGregor returned his focus towards mixed martial arts (“free fighting” as Conor likes to call it). Once again, “The Notorious”  would need to change his conditioning program to prepare for the rigors and movements of MMA, the ones that would require him to be more limber, lean, and long when throwing kicks and spinning techniques while establishing distance.

McGregor would need a new body and shape to take on Khabib Nurmagomedov in 2018. Unfortunately, the process didn’t go as planned, although, it’s now common knowledge that McGregor went into battle with a severely damaged foot. But that’s another story.

Buy back to the McGregor fast program…

Still incredible that once upon a time Conor McGregor made 145lbs. The picture on the left is of him hitting the scales for the Jose Aldo fight. The one on the right is from today's #UFC246 official weigh-in where he hit 170lbs. pic.twitter.com/pwu4O3LQOU

With new pictures of McGregor emerging on social media in this lead up to UFC 246, it’s clear that “The Notorious” has been putting in the time at the gym. He’s lean, he’s swole, he’s toned, he’s muscular. McGregor looks bigger than he ever has, which has many speculating about his cardio heading into the UFC 246 PPV main event on ESPN+.

Looking at the Mayweather, Khabib, and second Nate Diaz fights, it’s apparent that McGregor fades in the later rounds. But McGregor has also shown an ability to make adjustments and conserve energy in case the fight goes longer. Never was this better displayed than the second fight against Nate Diaz at UFC 202, when McGregor earned a majority decision over his rival. Cruising through the fourth round, McGregor stormed back in the fifth to seal the deal.

And much like McGregor’s coach, John Kavanagh, recently said something to the effect of >Conor knows more about fighting than all of us combined, it may just be true, and the proof may just be in his physical conditioning.