Will Conor McGregor vs. Cowboy Cerrone Be The Fight Of The Decade? 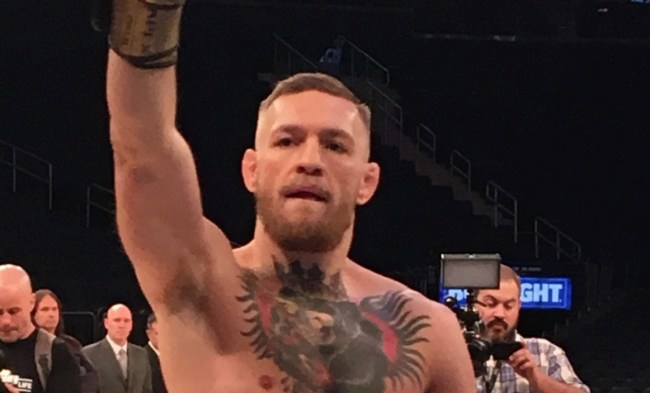 I know, this is a real semantic argument we’re laying down on you here with that headline, but you try and resist calling this fight what it really is …

“The Notorious” Conor McGregor is returning to the Octagon on January 18, and it’s basically the biggest deal in MMA, since, well, his last UFC fight, which just so happened to be the highest selling Pay Per View event in UFC history and the MMA fight of the last decade.

McGregor is taking on the highly decorated Donald “Cowboy” Cerrone in the UFC 246 main event, and there’s no doubt that this fight will be one of the biggest UFC Pay Per Views in recent memory. Come to think of it, UFC 246 definitely has the potential to be the biggest PPV of the ESPN+ era. It will also inevitably break all records for the new decade, you know, seeing as it’s the first big MMA event of the ’20s.

But still, consider all angles, all the accolades, all the storylines, and, well, the actual fighters competing in the UFC 246 main event. Consider them all, and you’ll realize that this is going to be one hell of a scrap. One hell of a scrap, and yes, the biggest fight of the decade…

There really is no question that Conor McGregor is the biggest star the UFC and mixed martial arts has ever launched into orbit. He’s an absolute supernova, a living legend, and an international sensation. But he’s also reinventing himself after a hellacious 15 months which saw McGregor go on a worldwide bender following his submission loss to Khabib Nurmagomedov.

A win against Cerrone at UFC 246 is essential for McGregor, should he ever want to reclaim his title as the best fighter on the planet, but against a veteran as savvy as “Cowboy,” nothing will come easy for “The Notorious.” It’s that exact pressure and these exact stakes that make the UFC 246 PPV main event on ESPN+ a perfect recipe for a high action fight.

Anyone who has been following McGregor since before he went off to box Floyd Mayweather knows that Conor’s biggest weapon is his devastating left hand. One good shot from McGregor’s left to Cerrone’s head could instantly impact the direction of the fight, even end it, but will he be able to catch “Cowboy?”

At this stage of his career, McGregor has the defensive wrestling to thwart Cerrone’s takedowns, but he needs to watch out for the head kick, which is basically “Cowboy’s” finishing move, having ended at least a half dozen fights inside the Octagon stemming from the technique.

Sure, both McGregor and “Cowboy” have other ways to win (Conor could go the tactical route and outpoint Cerrone, much in the same way he outlasted Nate Diaz at UFC 202, and “Cowboy” could slap on the choke should he be able to catch McGregor from the outside), but this PPV main event is bound to be a stand up affair with both Conor McGregor and “Cowboy” Cerrone gunning for the killshot, looking to land the knockout blow.

And what about the pressure? Well, let’s go to a whole different level of semantics …

See, there’s definitely pressure on McGregor to win this UFC 246 main event, which is being contested at welterweight. Conor literally has not won a single combat sports contest in 38 months, which puts enormous pressure on “The Notorious.” However inside the Octagon, pressure is his friend. Inside the Octagon, McGregor can use his forward pressure to throw Cerrone off rhythm. This will most likely be McGregor’s plan of attack.

“Cowboy” Cerrone is known to have some difficulty against pressure fighters. Cerrone prefers space to gauge distance and master timing. When his zone is disrupted and crowded, it becomes increasingly difficult for “Cowboy” to implement his gameplan, which means that he’ll likely move forward early, trying to assert his dominance.

McGregor can’t give Cerrone any respect, and will thus move inside from the onset and look to land big punches early.

The whole fight is really the perfect setup for either fighter (Cerrone has as much to gain as anyone who has ever beaten Conor McGregor, and a rematch against Nate Diaz at welterweight would probably be the next step should he win at UFC 246), but keeping the focus on McGregor here, a win over “Cowboy” basically gives McGregor carte blanche in the UFC. He can take his pick, whether that be a lightweight title shot against Khabib, a welterweight title shot against Kamaru Usman, or a crack at UFC BMF champion Jorge Masvidal.

Deserved or not, all of those options are great, and they’re also great options for the UFC, who can promote McGregor, a winning McGregor, in top form, into any number of high profile bouts. Which spells big, big money, if you don’t catch the drift.

It’s too much of a stretch to say that the coming decade of the UFC and mixed martial arts rests on the success of the UFC 246 PPV main event on ESPN+. The UFC has too many great fighters at this point, fighters like Israel Adesanya, Jon Jones, Stipe Miocic, Amanda Nunes, and Valentina Shevchenko. But no one sells a UFC PPV quite like Conor McGregor, and it’s fitting that “The Notorious” will headline the first major MMA PPV of the new decade. It’s McGregor’s chance to set the tone for the whole sport in the 20s after setting the tone for the majority of the aughts.

Conor McGregor returns to action on Saturday, January 18, when he takes on Donald “Cowboy” Cerrone in the UFC 246 PPV main event.

Dan Shapiro is a writer, editor, musician, and producer currently based in Los Angeles. In addition to covering some of the biggest fights in combat sports history, he’s also hunted down the world’s best sushi, skied the northern hemisphere in July, and chronicled Chinese underground music for publications like CNN, the New York Daily News, VICE, and Time Out. Dan also conjured up a ghost at the Chateau Mormont while out on assignment for RoadTrippers. Follow him on Twitter here.