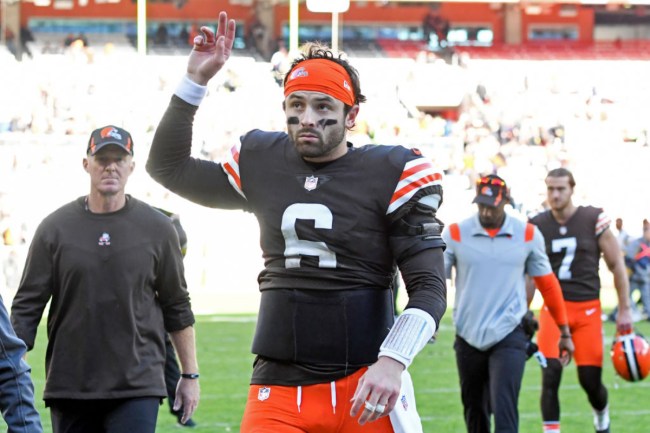 The question surrounding Baker Mayfield hasn’t been if, but when the Cleveland Browns will be trading the QB away. According to a new report, a move likely won’t happen for quite some time.

NFL insider Ian Rapoport joined Wednesday’s edition of ‘The Pat McAfee Show’ and gave his opinion on the Mayfield situation. He explained that the Browns weren’t exactly in a hurry to deal the signal-caller.

“There’s no deadline. Teams will settle in now for OTAs. They’ll have rookie minicamp, they’ll want to see the rookies,” Rapoport explained.

“Everything is going to slow down a little bit. I don’t get the sense that anything will happen with Baker Mayfield until maybe June at the earliest.”

"I don't get the sense that anything will happen with Baker Mayfield until June at the earliest" ~@RapSheet#PMSLive pic.twitter.com/8MPisZU33b

Prior to last week’s 2022 NFL Draft, Cleveland general manager Andrew Berry made it clear that the franchise was focused on the draft and that he’d look at the Mayfield situation after it was completed.

Well, the draft is in the rearview, but based on Rapoport’s report, the Browns aren’t exactly looking to make a move as quickly as possible.

Mayfield has made his thoughts about the situation in Cleveland crystal clear. He wants out of town and feels disrespected after the team went out and acquired Deshaun Watson.

“I feel disrespected, 100%,” Mayfield said on the ‘Ya Neva Know’ podcast. “Because I was told one thing and they completely did another. That’s what I’m in the middle of right now.”