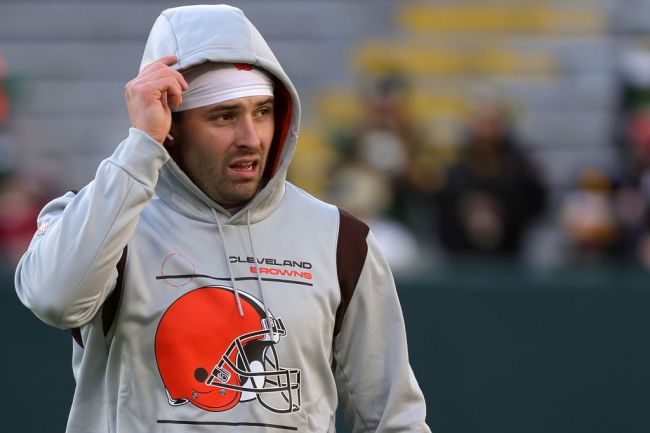 The NFL Draft has come and gone and somehow Baker Mayfield is still a member of the Cleveland Browns. It is a truly shocking turn of events as it was assumed that somebody would make a move for the quarterback during the draft to serve as a bridge QB to play in front of one of this year’s rookies.

Then a move never materialized. The Browns reportedly got close, but the move was held up by a disagreement on how much of Baker’s salary they would pay this season.

Now Baker and the Browns seem to be stuck with each other, but Mike Florio believes this might be because of the team’s new plan.

The Browns could now be waiting for a freak injury to happen to a starting quarterback elsewhere. What if their current starter is suspended for a full year? The Browns could then need to keep Baker Mayfield. https://t.co/TzYTIFNjiq

If this is really the route the Browns are choosing, it’s a strange one. The most obvious concern is that Baker could just hold out if the Browns don’t trade him. Maybe he’d see starting for the Browns as an opportunity to impress teams ahead of free agency, but he also might not be able to get past the “disrespect” he is feeling thanks to this situation.

If their plan is actually to try and trade him if another team’s starter gets injured, they are taking a serious gamble. There are only so many teams that enter the season expecting to compete in a given year. There are even less that would see themselves as contenders with anybody other than their current starter at quarterback.

That makes for a pretty short list of teams that might trade for Mayfield during the season. Instead, what this approach would most likely lead to would be the Browns losing Mayfield for nothing at the end of the season after spending the number 1 overall pick on him just 5 years ago. That would be a disastrous outcome for the Browns.

It is unclear what exactly the Browns are planning for Baker Mayfield right now, but they should be at the pint right now that they’ll take whatever they can get for him even if they have to cover his whole salary this season.