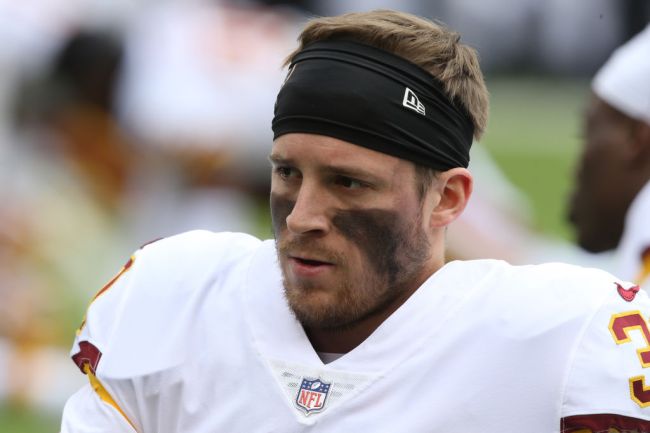 With 53-man rosters set in stone, Washington Football Team cornerback Troy Apke is officially making history. The 26-year-old from Pittsburgh is officially the first caucasian player at his position to make a 53-man roster in the NFL since 2002.

Apke, who played his college football at Penn State, was drafted in the fourth round of the 2018 NFL draft by Washington. He is crazy quick and Deion Sanders had his mind blown that a white guy could run as fast as he does at 215 pounds.

Troy Apke getting a pick gives me a reason to post this video of Deion Sanders realizing that his speed is not just deceptive. pic.twitter.com/1EtFn4Xc2U

However, through his first three years in the league, he has played the free safety position. In fact, he beat out Sean Davis last season to be named the starting free safety for 2020.

The hyper-athletic safety showed flashes of greatness during the offseason and the Football Team chose to roll the dice with hopes of filling a void at the position.

After poor play through the first few weeks, Apke was benched. He was the backup for 11 of 16 weeks last year but made it through the offseason without being cut.

As Apke entered training camp, his role with the team was uncertain until OTAs. Head coach Ron Rivera and defensive coordinator Jack Del Rio chose to move Apke to cornerback and he continues to impress with his athleticism.

Once again, Washington is choosing to take a gamble. Apke was listed as the fifth-string cornerback on the team’s official 53-man roster earlier this week.

The first white male at cornerback since 2002.

Apke is now the first white cornerback to make an NFL roster in 19 years. Prior to the WFT’s decision, Jason Sehorn was the last caucasian to take the field at the position in a significant capacity.

Sehorn played with the New York Giants from 1996 to 2002 and had two incredible seasons in his first two years before tearing his ACL. He was never quite the same after that and was literally the last of his kind for almost two decades.

Now, this notion isn’t entirely true. There have been two white cornerbacks since Sehorn, kind of.

Dustin Fox took about a dozen snaps at cornerback for the Eagles and the Bills in 2006 and 2007, but he played a variety of different positions. Ethan Kilmer also played all over the field and took one snap at cornerback with the Bengals in 2006— intercepting a Drew Brees pass and returning it 52 yards.

In addition, Julian Edelman was forced to play cornerback for the Patriots in 2011.

Whether Fox, Kilmer and Edelman count is questionable. If you consider them as a white cornerback in the NFL, Apke is the first since 2011— or 2007 if you count Kimer and Fox but not Edelman.

If you do not count the three, which I do not, Apke is the first white cornerback since 2002. The streak has been broken.