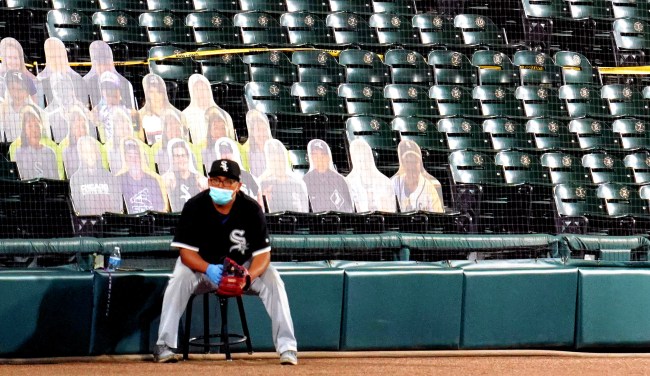 With fans not allowed to attend Major League Baseball games in most of the parks, numerous franchises have offered to create cardboard cutouts of fans, for a price, to help make it (sort of) appear as if there are people actually sitting in the empty seats near the field.

One of those organization that has given fans this option is the the Chicago White Sox. And one of those fans who has taken them up on the offer has purchased 100 cardboard cutouts of himself to fill dozens of empty seats near the visitors dugout at Guaranteed Rate Field.

The White Sox made 1,500 seats available to purchase for $49 each so that means almost 7 percent of the fake fans in the stands at Guaranteed Rate Field will be filled by one man: Paul Garrett.

It also means that for the three-game series against Chicago’s long time rival Minnesota 100 Paul Garretts will be heckling Twins players in one of the most bizarre scenes ever witnessed in the history of sports.

White Sox fan Paul Garrett bought 100 cardboard cutouts of himself! He’ll be cheering on the White Sox near the visitors dugout. pic.twitter.com/hj8TJbyhpP

The $4,900 Garrett paid to have his likeness boo Twins players during the season’s opening series will be put towards White Sox Charities. Then, when it’s over the team will be sending all 100 cutouts to Garrett to do with as he pleases.

Can’t wait to see what he comes up with.