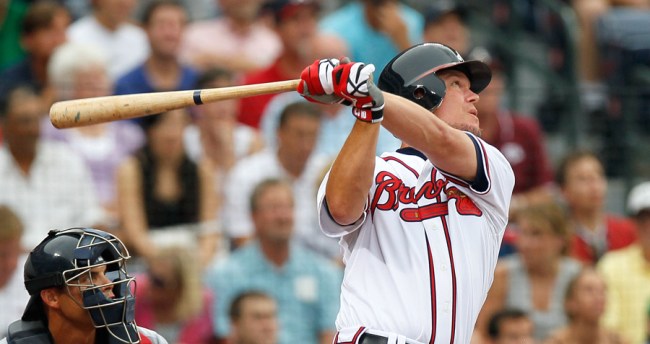 Way back in October of 1990 a Chicago White Sox scout named Alex Cosmidis filed his evaluation of a young Larry Wayne “Chipper” Jones Jr. And considering Jones will be one of six players, along with Jim Thome, Vladimir Guerrero, Trevor Hoffman, Alan Trammell and Jack Morris, will be inducted into the Baseball Hall of Fame this summer, his evaluation turned out to be WAY OFF.

Luckily for the Atlanta Braves, Cosmidis did not work for them and they went ahead and made Jones the number one overall pick in the 1990 MLB Draft.

Cosmidis graded Jones overall at a 50/C and added in his notes that the future Hall of Famer “displayed nonchalant attitude at times,” “he was a disappointment to me” and “showed slap type swing from (left) side.”

Early scouting report of Chipper Jones from a #WhiteSox scout. Boy did he let one slip by.@Braves @RealCJ10 pic.twitter.com/FAaCTCE8Vi

Cosmidis can’t be totally blamed for his assessment of Jones though. Scott Merkin of MLB.com pointed out back in 2014, “This report was filled out during Instructional League action in 1990. It came at the end of Jones’ first professional season with the GCL Braves, where he hit .229 with one homer and 18 RBIs, and arguably was a bit worn down after being selected No. 1 overall in the First-Year Player Draft.”

As they say, the rest is history.

(If only Johnny Manziel had been so lucky to have scout be that wrong about him.)