Who Are Patrick Mahomes’ Parents? Here’s What You Should Know About Pat Mahomes And Randi Martin 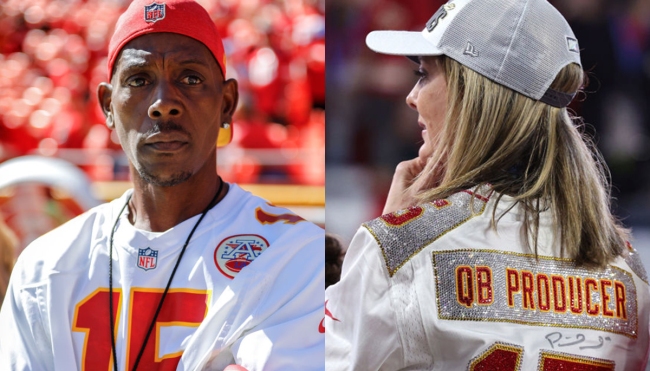 When it comes to Chiefs quarterback Patrick Mahomes and his life off the field, there’s plenty going around thanks in no small part to his wife Brittany (formerly known as “Brittany Matthews), a noted champagne enthusiast and distributor. There’s also his younger brother Jackson Mahomes, who is best known as a TikTok influencer with a tendency for dancing at both inopportune times and in inopportune locations.

Those two have generated plenty of attention for their antics in recent years, but what about Momma and Poppa Mahomes? Just because they aren’t involved in unfortunate public spectacles (at least to the same extent) doesn’t mean they don’t deserve a little attention, especially because they raised Patrick, undeniably[cue ESPN football analyst voice] one of the most talented quarterbacks to play in the NFL.

So who are Patrick Mahomes’ parents? Are they also both unbelievable athletes? Do they also both have some pretty wild hair, and (perhaps most importantly) have they ever considered talking to young Jackson about his behavior?

Let’s get into it, shall we?

Who Is Pat Mahomes?

He’s the quarterback for the Kansas City Chiefs and the man largely responsible for giving the team their first Super Bowl win since 1970.

Who Is Patrick Mahomes Sr.?

Patrick Mahomes’ father is a former professional baseball player who spent time on a number of Major League Baseball rosters before heading to Japan in a career that spanned between  1992 and 2003. During that time, Mahomes made the rounds, playing for the Minnesota Twins, Boston Red Sox, New York Mets, Texas Rangers, Chicago Cubs, and the Pittsburgh Pirates in America and in Japan, the Yokohama BayStars. Primarily a relief pitcher, Mahomes finished his career with a 42-39 record and a 5.47 earned run average.

Mahomes was born in Texas in 1970 and played football, basketball, and baseball in high school. An injury led him to give pitching a try and after high school and declining scholarships to play both basketball and football for Division I schools, he elected to play baseball for the University of Arkansas during his senior year of high school.

However, he was also picked up in the sixth round of the MLB draft by the Minnesota Twins at that time and decided to go pro instead. Four years later, he made his Major League debut and in 1992, he appeared in 14 games for the Twins, going 3-4 and logging a 5.04 ERA. Mahomes was traded to Boston in August 1996. The Red Sox would release him a year later and Mahomes headed to Japan for a year.

Statistically, Mahomes best season was probably the 2001 season. After returning to the big leagues and heading back to his home state to pitch for the Rangers, Mahomes appeared in a career-high 56 games, going 7-6 with a 5.70 ERA. Two years later, Mahomes was done pitching at the professional level. He kicked around the minor leagues and independent leagues for the next few years before calling it quits in 2009.

Who Is Randi Martin Mahomes?

Randi Martin married Pat Mahomes Sr. at some point “in the late 90s” based on the information that’s been dug up by a handful of websites. Was it before Patrick Mahomes was born? Was it after? I don’t know for sure, but when you consider Patrick Mahomes was born in 1995 (which would be considered the mid-90s), that would appear to be the case.

Either way, she married the elder Mahomes at some point, and in 2000, Jackson was born. Six years later in 2006, while her husband’s baseball career was nearing the end, the couple got divorced (Randi elected to keep Mahomes as her last name despite the divorce.

Before all that, Randi Martin was born on January 18, 1976, in Tyler, Texas. She was reportedly a good student in high school (as well as a cheerleader) and met Mahomes shortly after graduating high school.

Since her divorce from Mahomes in 2006, the two have remained largely on good terms, keeping things civil for the sake of their children (Martin had a daughter, Mia Randall, in 2011).  She has also moved on from being a housewife to becoming a private events planner and philanthropist, spending the majority of her time focusing on charity work.

In 2020, she helped organize a fundraiser for Variety Children’s Charity of Greater Kansas City, an organization that seeks to provide resources for children with special needs. In addition to her charity work, she has been known to help guide and monitor the social media exploits of both Jackson and Mia.

According to reports, her net worth is roughly $2 million.

How Did Patrick Mahomes’ Parents Meet?

How did they meet? Really? We don’t even know when they got married! But we can make an educated guess.

Randi, as was previously stated was born in 1976, so she probably was in high school from 1990 to 1994, give or take. According to Baseball Reference, Mahomes was playing for the Twins and the Red Sox during that span, but we can imagine he still made it back to Texas during the off-season.

I’m going to assume they met at the Piggly Wiggly while shopping, but feel free to use your imagination. Regardless of what actually unfolded between Mahomes’ parents, they got married at some point and were married for about ten years and their relationship gave the world the football treasure who is Patrick Mahomes.