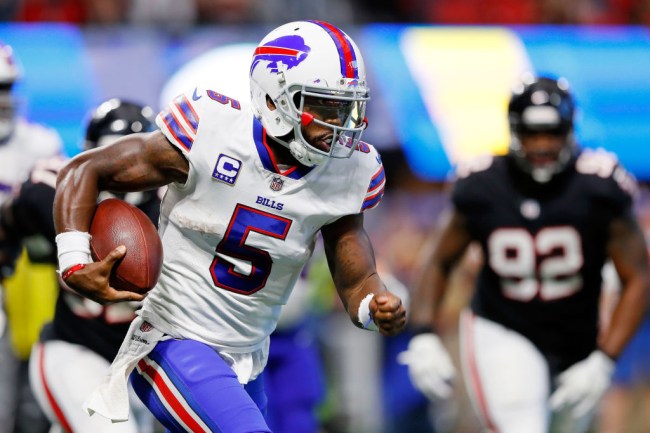 Injuries obviously create opportunity, which is great for fantasy football. We all love to pounce on the hot new running back who takes over the starting job and will receive 20+ touches a game. Unfortunately, injuries are also crushing to fantasy football. We went through a few a couple weeks ago with the loss of Dalvin Cook and Odell Beckham Jr., but no injury impacts the NFL or fantasy football as much as Aaron Rodgers’ broken collarbone. It’s crushing to know the Packers wide receivers aren’t going to have the same value and that both running backs, who previous had potential, will likely be rudderless. Quarterback is such a tough position that the next man up very rarely creates the same production as would happen with running backs. And the less production that exists in fantasy football, the less fun we all have. Production and opportunity are what creates trades and roster moves. This just creates despair, anger, and lower scoring games. Pour one out for the man State Farm guy.

He doesn’t have any real receivers left, but Tyrod Taylor is a quarterback to look at this week. (Plus Tyrod uses those legs to snatch fantasy points as well.) The Buccaneers are giving up the third most fantasy points to opposing quarterbacks and have enough offense to push the Bills to get to 20 or so points to win. With Tyrod’s historical profile showing he plays better at home, this week’s home affair against Tampa Bay is a spot to use him.

We needed a week to see how things would shake out in the Vikings backfield, but what we thought is true. Latavius Murray is still bad at football and McKinnon is a playmaker. The Ravens have allowed over 150 rushing yards to running backs in three of their last four games. Look for McKinnon to smash again.

Here’s a sneaky note about the vaunted Seahawks defense: they’re actually not that good against the run. Seattle is 26th in rushing defense DVOA according to Football Outsiders and that’s #bad. The Giants showed more of a commitment to the run last week with all their receivers missing and should do so this weekend because that’s the only chance they have to win.

The receiving situation in Washington is an unmitigated disaster. Terrell Pryor hasn’t done shit since coming over from Cleveland and something must be wrong with Jamison Crowder because he’s terrible this year. The coaching staff has made comments this week that Doctson needs to be more involved and it’s not just coach speak. Doctson is a former first rounder who’s now healthy and the Eagles have been getting beat by receivers all year.

The 49ers will likely be losing early in this game and could be down big by halftime. San Francisco will have to throw most of the second half and Dallas’ secondary is their weakness. Even with C.J. Beathard in at QB, Garcon should see 10+ targets and plenty of production.

The same reasons that apply to Garcon apply to Kittle. Plus Kittle went to Iowa with Beathard, so they already have a developed connection. Kittle saw 8 targets last week, so he’s clearly a bigger part of the Niners offense.

Cincinnati’s offense has looked much better since switching offensive coordinators after a horrific start. Dalton has been part of that resurgence, but he’ll run into a brick wall known as the Steelers secondary this weekend. Pittsburgh has given up the second fewest passing yards per game this year, which is why they’re only giving up 9.8 fantasy points per game to quarterbacks this year.

None of us really expected Murray to have the season he had last year, but he’s definitely crashing back to earth in his age 29 season. He’s now in what seems to be a full time-share with Derrick Henry and Henry is getting the fourth quarter carries. Murray’s hamstring also started balking on him again last week, so look for Tennessee to rest him if they’re winning easily as expected vs. Cleveland. The Browns are also a sneaky-good run defense.

The Bears have been run-heavy since switching over to Mitchell Trubisky at QB, but they’ll have a tough time doing that successfully vs. the Panthers this weekend. Carolina has only allowed one 100-yard rusher so far this season and also only give up a rushing touchdown in half their games. While Howard is sometimes featured in the passing game, this doesn’t look like a positive situation or a positive game script for him.

Hilton generally plays better at home, but he’s going up against the best corners he’s seen all year. He also isn’t seeing the slot nearly as much as he has historically, so the Colts don’t seem likely to get him away from Jalen Ramsey and A.J. Bouye. It’s a matchup to avoid this week.

I get the squeaky wheel narrative for getting Bryant more looks this week, but Cincinnati’s defense’s strength are the corners on the outside. Plus Pittsburgh is getting plenty from Juju Smith-Schuster so they don’t totally need to buy into Bryant’s complaints.

Even if Jameis Winston doesn’t play, you want to leave Brate on the bench this week. Buffalo hasn’t allowed a touchdown to tight ends so far this year and 71 yards is the most they’ve allowed in any game. The tight end position is slim, but you’ll need to find someone with better upside this week.