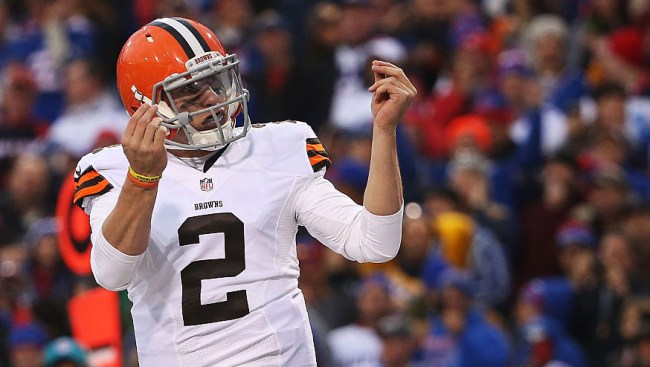 After doing his patriotic duty and giving President Donald Trump some sage Twitter advice, Johnny Manziel shocked everyone by up and quitting the social media service completely.

So what could possibly possess Johnny Football to cut off this lifeline to his hordes of fans?

Well, according to TMZ, who spoke to JFF…

We reached out to Johnny who explained, “Twitter has been nothing but a distraction for me. I’ve said all I can say.”

“Now I need to shut the hell up and work on bettering myself and my situation.”

That’s the second time in the past week Manziel has actually said something that sounded…mature. Perhaps he is really changing for the better.

Of course, Manziel is still quite visible on Snapchat and Instagram, but, hey, baby steps here people.

In other Johnny news, it was revealed earlier this month in a piece by Sports Illustrated on Stephen Jones (Jerry Jones’ son), just how much Jerry REALLY wanted to draft Manziel back in 2014.

A couple of highlights…

“I’ll never forget that morning,” recalls Stephen. “Jerry said, ‘Let’s go through the [prospects] again, make sure we all see eye to eye on how we’ve got ’em ranked.'” If Manziel was still there at 16, the patriarch added, “I assume we’d take him–wouldn’t we?”

Replied Stephen, with some delicacy, “Well, I don’t think we would.”

Smart move there, Stephen, however dad was still undeterred…

“So there we were, staring at Johnny and Zack Martin,” Stephen says. Jerry went around the table trying to wrangle support for Manziel, but he came up empty. “Lonely is the right word,” Jerry says. “I don’t think there was another soul in the room” who shared the owner’s enthusiasm for Johnny Football. Instead, Jerry suggested his team trade out of the pick. “But no one was calling to trade,” explains Stephen. By this time the boss “was not happy,” says the son. Exasperated, Jerry finally asked, “So no one in this room wants to take Johnny Manziel?”

Now just imagine what the NFL landscape would look like now with the Cowboys having one less fierce offensive lineman and Johnny Manziel as their headache for the past few years. Would Dak Prescott even be on the team right now?