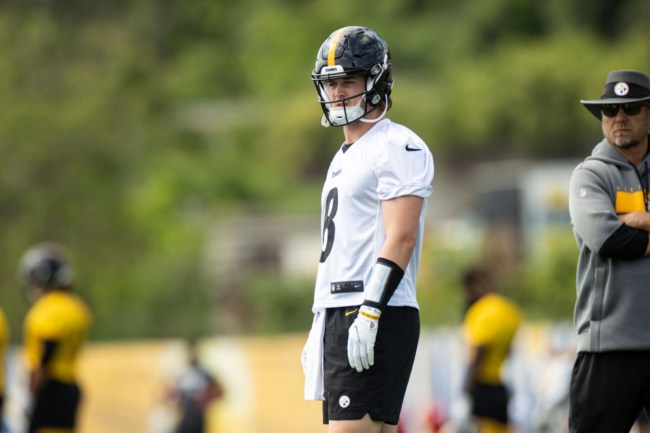 Kenny Pickett’s hands, and the fact that he wears gloves, have been a topic of discussion in the football world for months now. While a quarterback wearing gloves on both hands is unorthodox, Pickett’s reasoning behind his decision to do so makes plenty of sense.

Pickett refused to have his hands measured at the Senior Bowl back in January, which raised red flags for NFL teams scouting him. His hands were officially measured at a later date ahead of the NFL Draft coming in at 8.5 inches, well under the nine-inch standard for NFL QBs.

It’s clear that Pickett rocks the gloves to get a better grip on the football, which was no concern for the Pittsburgh Steelers who drafted him 20th overall.

But when, and why, exactly did Pickett start wearing gloves? He told Pat McAfee it’s a comfort thing during a recent appearance on his show.

“After the UNC game that you called, I stuck with the gloves, it just feels more comfortable and I feel great throwing the ball,” Pickett explained.

Picket also went on to explain that he trained with an NFL ball this last offseason just to get a feel for the different-sized football.

"After that UNC game that you called I stuck with the gloves.. it just feels more comfortable & I feel great throwing the ball" ~@kennypickett10#PMSLive pic.twitter.com/cH8KeYnbM0

The Pitt standout threw for 346 yards and three touchdowns in that particular game against North Carolina last season, a 30-23 overtime win for the Panthers.