Why Did Todd Gurley Hardly Play In The NFC Championship? ‘I Didn’t Deserve To Be In There’ 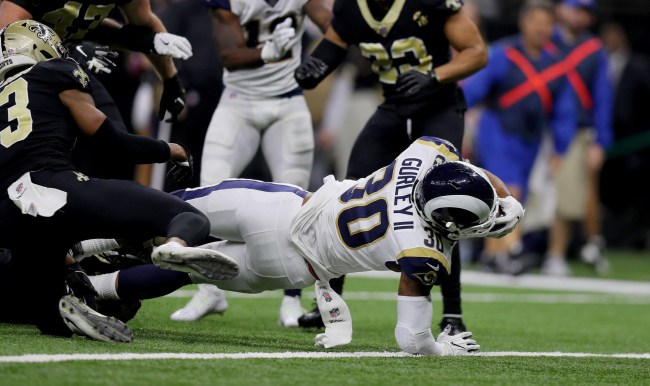 Los Angeles Rams running back Todd Gurley had perhaps his best season in 2018 – no small accomplishment considering where he set the bar in 2017 by scoring 19 touchdowns and rushing for over 1,300 yards.

After averaging a career-high 4.9 yards per carry and scoring a total of 23 touchdowns this season, Gurley will probably be one of the finalists for 2018 NFL MVP.

And yet, on Sunday during the very controversial NFC Championship game, Gurley only handled the ball a grand total of five times – four rushes for 10 yards and one catch for three yards.

Gurley even scored the Rams’ first touchdown of the game in the second quarter to put the Rams within three points of the Saints.

So why did Gurley only get one touch the entire second half, none in the third quarter?

Apparently, at least according to Rams head coach Sean McVay and Gurley himself, it wasn’t because he was injured, as many who watched the game speculated.

“It was a flow for the game,” McVay told the media after the game. “I thought Todd’s run from the 5 on the two-minute drive was outstanding. What personifies Todd … is this is an MVP-caliber player, and he just kept fighting. He kept supporting his teammates. He’s gonna have an instrumental role in the game against whoever we play — whether it be the Patriots or the Chiefs. Today, that was kind of just the feel for the flow of the game that we had. Not anything against Todd. CJ did a nice job, but I thought they did a good job as a whole slowing down our run game, and we kind of just had to grind some things out today.”

Far be it from me to question an offensive genius like Sean McVay, but… what? While C.J. Anderson has been on a roll the past three games, rushing for 422 yards at 6.4 yards a clip, Anderson was released by the Broncos, Panthers, and Raiders – ALL IN 2018 – and he only averaged 2.8 yards per carry on Sunday.

When Gurley was asked why he didn’t play more, his answer was amazingly positive, especially considering he’s the highest-paid running back in NFL history.

Guess he’s not lying. He did seem happy after the game.

Plus, with two weeks to rest, Gurley should be pretty fresh and will be able to leave it all out of the field on Super Bowl Sunday before fixing that knee that had “nothing” to do with his ineffectiveness and/or benching.

Official: Rams RB Todd Gurley (knee) is out for Week 17 against the 49ers.