Wilder vs. Fury 2 Stream: How To Watch Tonight’s Heavyweight Fight via ESPN+ 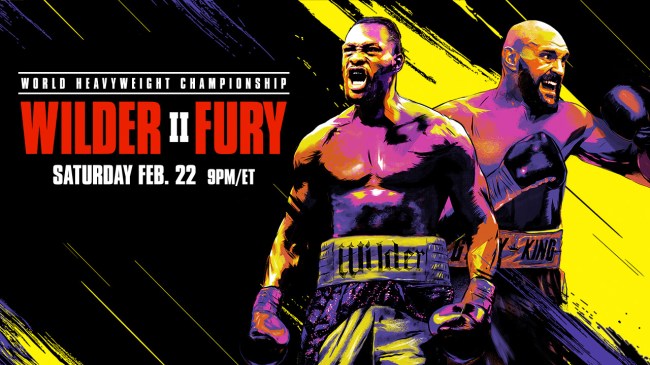 After almost 14 months of anticipation, Wilder vs. Fury 2 fight day has arrived. Tonight Deontay Wilder squares up against Tyson Fury at the MGM Grand Garden Arena in Las Vegas in a heavyweight boxing match that’s gloriously reminiscent back to the glory days of heavyweight bouts.

After a draw from their first fight at the Staples Center in 2018, both Wilder and Fury remain undefeated. Wilder is 42-0-1 with an insane 41 knockouts under his belt and Fury is 29-0-1, with 20 knockouts.

There’s no doubt that Wilder vs. Fury 2 is going to be an evenly-keeled slugfest. The question boxing fans have been asking is who is going to knock out who in this big money fight – Fury has vowed for a KO and spent the past year with new trainer SugarHill Steward preparing for exactly that moment.

Deontay Wilder, however, remains an overall -135 favorite by the oddsmakers. Wilder has a 95% knockout ratio for this fight and the best bet from Vegas is that it won’t go the full 12 rounds.

As our Dan Shapiro notes in his preview for tonight’s heavyweight war, “Unlike their first bout, both Wilder and Fury seem to have built up a significant amount of resentment towards each other. The question – Who is gonna KO who? Because it sure doesn’t seem like this thing is going the full 12.”

Tonight we find out by tuning into the Wilder Fury stream, available on most devices for ESPN+ subscribers.

Below, our guide for how to watch the Wilder Fury stream tonight:

Step 1: Top Rank Boxing cut a deal with ESPN to stream the Wilder vs. Fury 2 heavyweight title fight on ESPN Plus. This is great news for UFC and Top Rank boxing already familiar with the ESPN Plus livestream process for big PPV fights.

It’s easy to sign up for an ESPN+ account so you can watch Wilder vs. Fury 2. After you buy the fight on your phone or computer via ESPN+, you can live stream Wilder Fury on your TV via a variety of ways. More on that below.

It’s very easy to sign-up AND buy tonight’s Wilder vs. Fury 2 fight. A straight-forward bundle package includes a month trial subscription to ESPN+ at $4.99 a month and the Wilder-Fury PPV (valued at $79.99) for $84.98. That’s The key thing here is that you have to be subscribed to ESPN+ (…and if you’re wondering what is ESPN Plus, here are those details).

Second, Wilder vs. Fury 2 PPV landing page, which you can find right here.

All you have to do is hit BUY NOW – pictured below – and you’re good to go – the PPV has now synched with your ESPN+ account. 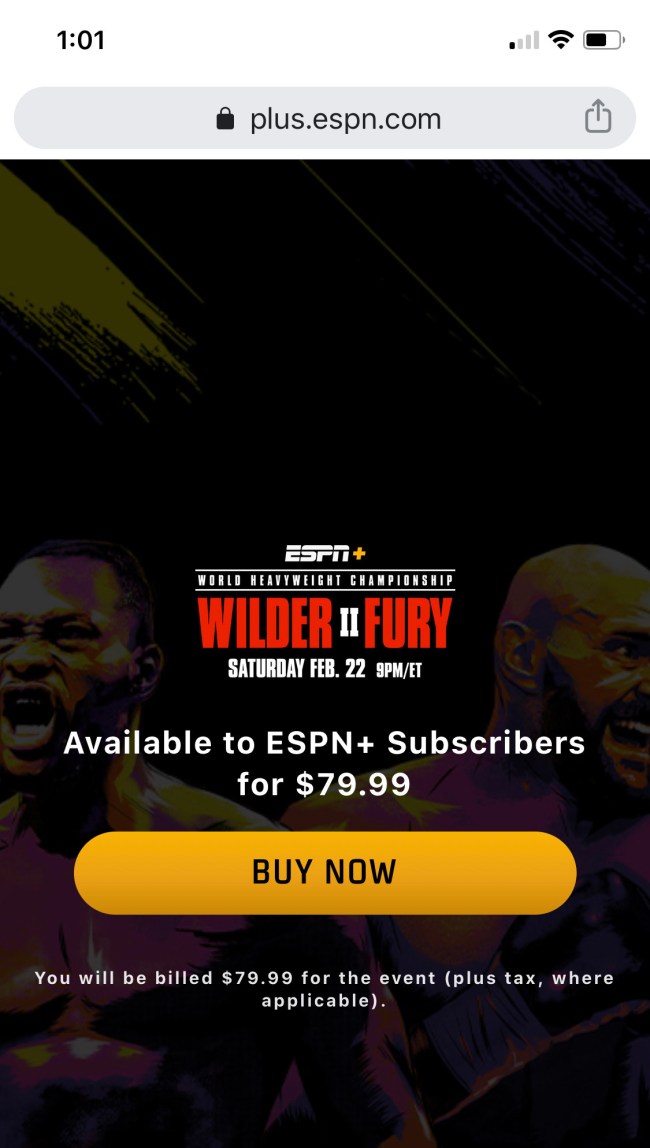 How to watch Wilder – Fury 2 on your devices

Now that you have ESPN Plus and you bought the Wilder – Fury 2 PPV, it’s time to tune-in. Here’s how you watch Wilder Fury stream on a number of devices, including the following:

All you have to do is sign into your ESPN+ account that you bought the PPV with. Then you’re all set to stream Wilder vs. Fury 2 via the ESPN+ PPV.

Yes, there’s lots of speculation the rematch between Deontay Wilder and Tyson Fury won’t go the full 12 rounds, which lots of boiling animosity between the two. They’ve pledged to flatline each other and have been training accordingly.

The truth is, this fight is anyone’s guess – which is what makes it so interesting. It’s a chance for heavyweight boxing to return to it’s glory days with two huge stars, hearkening back to an era where heavyweight fights dominated the cultural conversation. Back when names like Tyson, Foreman, Louis, Ali, Frazier, and Holyfield were king of the sports and entertainment worlds.

It’s going to be one heck of a night. Deontay “The Bronze Bomber” Wilder vs. Tyson The Gypsy King” Fury live from the MGM Garden Arena. If you’re a boxing fan – and sports fan in general – you don’t want to miss this.