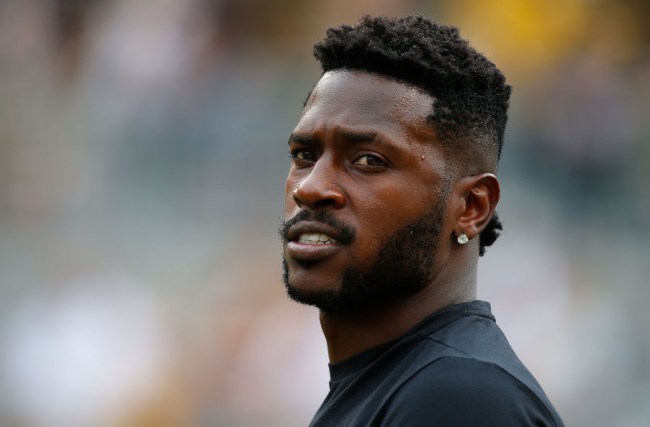 On Tuesday, Bill Belichick brushed off a question concerning whether or not Antonio Brown had the potential to be a distraction but it didn’t take long for that question to be answered after the newly-signed Patriot was hit with a lawsuit by his former trainer that alleges he sexually assaulted her on multiple occasions.

After the news broke, the wide receiver issued a statement via his lawyer proclaiming his innocence in which he accused his accuser of attempting to extort him and one source claimed he was planning to file a lawsuit of his own in response to the allegations.

The Patriots would eventually address the issue with a statement of their own and said they were working with the NFL, who will be conducting an investigation into the matter.

As of right now, Brown doesn’t appear to be facing any immediate disciplinary action, but on Tuesday night, Adam Schefter reported there’s plenty of speculation that he could be facing a suspension as the league takes a closer look at the situation.

The NFL is "beginning it's process right now, because the NFL did not know about this. It was unaware of this particular situation until tonight…" – Adam Schefter

Also mentioned people around the NFL wondered if Antonio Brown could be placed on the commissioner's exempt list pic.twitter.com/ZC1toleEpR

The common consensus seems to be that there’s a chance Brown could join the likes of Michael Vick and current teammate Josh Gordon by being placed on the Commissioner’s Exempt List.

Under NFL rules, Roger Goodell has the power to suspend players for as long as he pleases if he believes they’ve violated the league’s conduct policy thanks to the following clause:

The Exempt List is a special player status available to clubs only in unusual circumstances. The List includes those players who have been declared by the Commissioner to be temporarily exempt from counting within the Active List limit.

Only the Commissioner has the authority to place a player on the Exempt List; clubs have no such authority, and no exemption, regardless of circumstances, is automatic.

The Commissioner also has the authority to determine in advance whether a player’s time on the Exempt List will be finite or will continue until the Commissioner deems the exemption should be lifted and the player returned to the Active List.

The NFL has yet to directly respond to the lawsuit but I can only assume it’s just a matter of time until we learn about Brown’s fate.