Kentucky QB Will Levis Restores Faith In His Sanity, Reveals His Gross Coffee Habit Is Not Everyday Thing 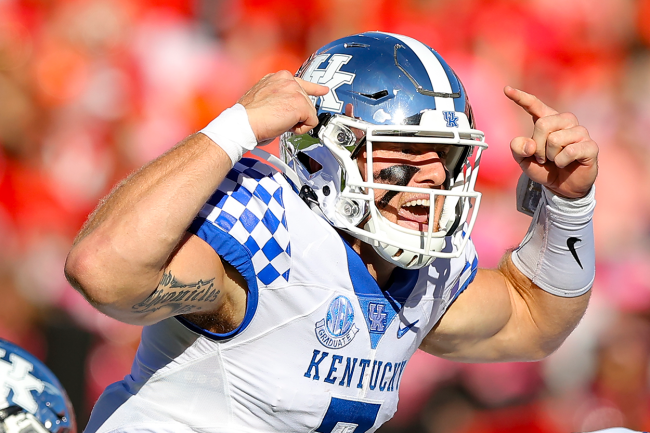 As the 2022 college football season quickly approaches, Kentucky is a popular choice as a spoiler team out of the Southeastern Conference. The Wildcats are coming off of a 10-3 season that culminated in a Citrus Bowl win over Iowa and a top-20 ranking.

At the helm of the program’s most successful season in the modern era (Kentucky also went 10-3 with a Citrus Bowl win in 2018) was quarterback Will Levis. Levis, a redshirt senior this fall, landed in the Bluegrass State by way of Penn State.

After three years with the Nittany Lions, Levis transferred to play for the Wildcats ahead of 2021. He used NIL to make sure that he wouldn’t get obliterated and his first year as part of Big Blue Nation was a good one.

Now, with the fall on the horizon and the 2023 NFL Draft somewhat within sight, Levis’ name is becoming one to watch. Not necessarily for a Heisman Trophy ceremony invitation (though that idea isn’t insanely far fetched), but to be a first round pick in April.

Despite his play on the field, Levis is an absolute lunatic. His food habits are psychotic.

First and foremost, Levis eats his bananas with the peels on. He just bites into them like an apple and chews it all up.

In addition, Levis eats Honey Nut Cheerios with Powerade as the base rather than milk. It’s his post-workout snack.

And if that wasn’t crazy enough, Kentucky quarterback Will Levis drinks his coffee with mayonnaise.

However, he recently revealed an important component to his coffee drinking that helps restore some faith in his sanity. Levis doesn’t always drink his coffee with mayonnaise, just sometimes.

Was on the phone with Will Levis earlier today and he said he does not drink mayo in his coffee every day but that he has done it on several occasions.

The fact that Levis is drinking coffee with mayo at all is deranged behavior. But at least it isn’t every single morning. Only on special occasions, apparently.