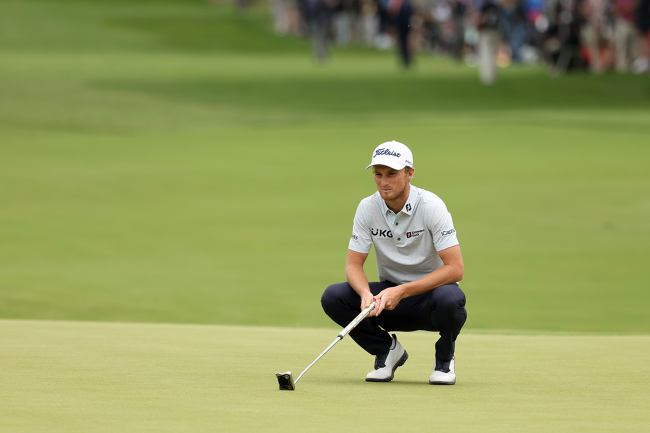 Will Zalatoris came within three holes of winning the PGA Championship. After playing to a 72-hole tie with Justin Thomas, the two went to a playoff and the 25-year-old California-native ultimately finished in second.

As Zalatoris played to his second second-place finish in a major, he finished the first two days as the leader. Ultimately, a 73 on Saturday left him with a deficit to overcome, but he did with a 71 on Sunday before falling in the playoff.

Throughout the weekend, golf fans began to notice that his putting stroke is rather clunky. One particular video went viral and it proceeded to stress out the entire internet.

In the video, Zalatoriz brings his putter back, hitches in a circular motion, and then comes forward and makes contact with the ball. It is very clunky and awkward, but clearly, it isn’t hindering him too much— seeing that he had a chance to win the PGA Championship during the final round.

If Zalatoris can win a major with this putting stroke then there’s hope for us all pic.twitter.com/kgFkoh6cWG

Here’s another, closer look at the bizarre stroke that Zalatoris uses on the green:

As Zalatoris finished out his round and the video blew up on social media, people were not sure how it was possible that he was in contention. Others were downright baffled.

Overall, the general consensus is that Zalatoris’ yippy putting stroke is almost too uncomfortable to watch.

This is giving me anxiety

You simply cannot win a major putting like this. It’s against the laws of nature. https://t.co/BKytVZdDGt

It should be illegal to show this on national television https://t.co/m028qhJLLE

Is it possible to catch the yips from a video? Asking for a friend https://t.co/L4hByi1LOT

Watching that gave me the yips

Will Zalatoris get his putting figured out? Is that just how he is? Whatever ends up happening moving forward, if the young, rising star is never able to take the next step and clinch his first major championship, the putting may be the reason why.