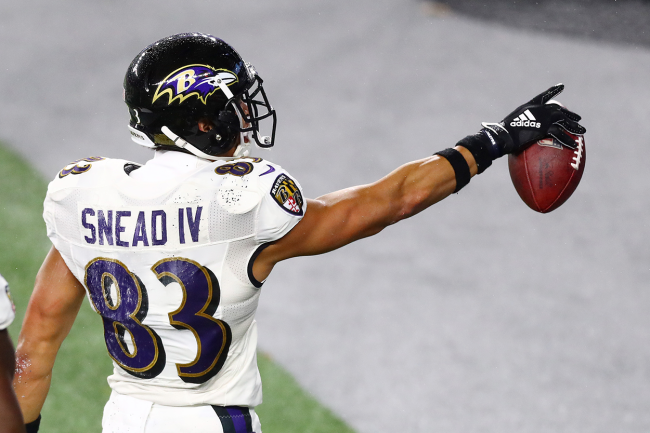 Over the course of recent history, the Ravens have simply been unable to lure top free agent pass-catchers to Baltimore. Despite the fact that the 2019 NFL MVP is at quarterback, wide receivers simply do not seem to have any interest in playing for the organization.

And as the Ravens gear up for 2022, the team’s receiver room is barren. After trading Marquise ‘Hollywood’ Brown, the team’s first round pick in 2019, to Arizona, Baltimore is left with Rashod Bateman, Devin Duvernay, James Proche II and Tyler Wallace.

Although there is some potential — woof. Not great.

According to Willie Snead IV, who played in Baltimore from 2018 through 2020, there is a reason that the team can’t attract receivers. He says that it’s not Lamar Jackson’s fault. It’s on offensive coordinator Greg Roman, who has run the offense since 2019.

In an interview with Tyler Dunne, Snead explains that the offensive scheme lacks creativity.

As a result, Willie Snead IV says that despite the allure of playing with Lamar Jackson, receivers are uninterested in playing for Roman’s offense.

“Yeah, it’s tough. When we’re comparing Greg Roman to a Sean Payton offense or Greg Roman to a Jon Gruden offense, it’s like night and day. There’s a lot more creativity in the passing game. If the Ravens had more creativity in the passing game and they put more emphasis on it during the season, I think more receivers would be open to coming. Because Lamar is a great player to play with. He’s all about the team. He’s fun. He brings the energy every single day. You want to play with quarterbacks like that. But the system pushes guys away.”

“That’s why the Ravens are always drafting two receivers every year. They keep them young. They keep them locked in on contracts, but for an older veteran guy coming in, he might get one shot to do this. I don’t know if the Ravens are going to be that one shot for them unless you’re a tight end or a big-bodied receiver who can win those 50/50 balls.”

Willie Snead IV then elaborated further on the difference between other NFL offenses and the Ravens’ offense under Roman.

First, Snead spoke about his time with the Saints.

“A lot more motion, shifting, trying to create matchups. Get those 1-on-1 matchups in space. I know Sean wasn’t big into play-action off the run game but he’ll get into that empty set and go five wide and start throwing different types of concepts at you that make defenses start to bite and here comes a wide-open hole across the middle. That’s gameplan specific. That’s Sean Payton, Jon Gruden. Those guys are from Bill Parcells all the way down. That’s the tree right there. That’s the offense for them. Greg Roman is just more run-heavy. He’s got misdirection. He’s got play action. He’s got power game. He’ll be a hell of a run-game coordinator in somebody’s offense, but I just think the passing game needs a little bit more juice. It’s kind of been like that for the past couple years. It’s something they do.”

From there, Willie Snead IV explained how Gret Roman’s offense is a deterrent for wide receivers to play for the Ravens.

“It’s tough. The tight ends get more creativity than the receivers. I don’t want to say the playcalling in itself, but when you’re putting in plays vs. certain defenses you know what certain stuff is going to work and what isn’t going to work. So every week has to be a brand-new gameplan for this specific team. Now if you’re just copying and pasting from one week to the other, you see in the NFL, these defensive coordinators are great. So if they see something once or see it twice, they’re going to lock that in and you probably won’t be able to get it that time.”

“You’ve got to be able to shift guys around and have different motions to make it look like one thing and it’s completely different. Those types of coaches take it to the next level, like Sean McVay and Matt LaFleur. Those guys put guys in position. They’ll shift and motion guys to identify that matchup and then exploit it. Those are the offenses I would like to be in and I know Hollywood is in that spot now where you can showcase all of your talent, all of your passing game. Not just the run game.”

Snead’s full comments can be found HERE. They are rather eye-opening. Dunne did a great job of getting the former Baltimore receiver to explain things in a coherent, comprehensive manner.