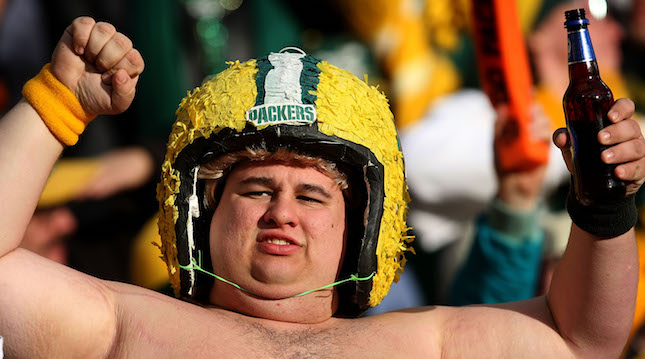 Wisconsin holds the proud distinction of being the drunkest state in the country, and after visiting for the first time a couple of months ago, I began to understand why. The second I crossed the state line, I developed this strange, irresistible urge to start drinking copious amounts of Spotted Cow, and I eventually found myself at a bar fulfilling my destiny while ordering multiple baskets of fried cheese curds to help soak up the alcohol.

I was able to get the full Wisconsin experience by visiting that bar on a Sunday during a Green Bay Packers game. I watched the matchup in Madison, but if I had found myself in Milwaukee, I probably would have made a beeline to the Bavarian Bierhaus, which lures fans in with the promise of free beer until the Packers score their first points of the game.

You’d think the bar would have reevaluated the promotion after Aaron Rodgers effectively dashed the Packers’ playoff hopes after suffering a broken collarbone during Week Six, but they decided to put their faith in Brett Hundley (for some God-unknown reason).

Things actually went pretty smoothly until Sunday’s game against the Ravens when the Packers were shut out for the first time in 11 years after falling to Baltimore by a score of 23-0. On the bright side, the Green Bay fans who decided to watch the game at the bar were able to drown their sorrows over the course of the four quarters.

General Manager Scott Bell says around 200 people were packed into his establishment during the game, and he and his staff served between 275-300 cups of free beer. Some fans had more than others.

That number seems incredibly low based on everything I know about Wisconsin, but there’s a very good chance fans were ripping shots to help numb the pain. Green Bay will face off against the Steelers on Sunday, who currently have the fourth-ranked defense in the country.

I wish Scott Bell the best of luck.