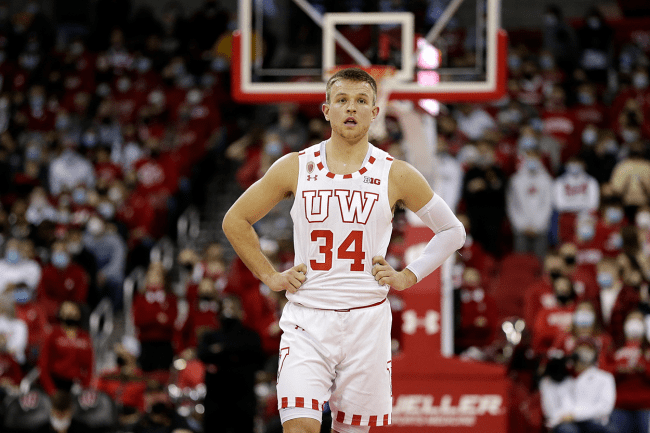 Brad Davison was one of college basketball’s biggest villains over the last five years. The Wisconsin guard has been a strongly-disliked heel in the NCAA since he arrived in Madison and continuously infuriated non-Badger fans.

He has been called a dirty player on multiple occasions after some very questionable incidents.

If you want to defend Brad Davison I guess that's cool but also he definitely punched this dude in the nutspic.twitter.com/beI9rBrzIS

And he was always amongst the “loudest” players on the collegiate level.

I guess Brad Davison is upset he won't be singing Varsity tonight 🤣🤣🤣 pic.twitter.com/uhDck9JIAO

This is a flop. Markell Johnson is 170 pounds soaking wet. Brad Davison reacts like he stepped on a landmine.

A year later, it's still embarrassing for the kid, the announcer (relax, buddy) and the referees. pic.twitter.com/dacQgXAPOm

Needless to say, Davison was not well-liked. But there is no denying that he can hoop.

And there is no denying that he is a tough player.

💪 doesn’t describe it!
Brad Davison has game even after getting his shoulder popped out of place…pic.twitter.com/VM4WZiRiO6

No matter what people think of him, Davison doesn’t really care.

Wisconsin's Brad Davison takes a lot of crap from a lot of people. He knows it, but he doesn't care. His response for how he wants people to remember his Badgers career: "I just hope people remember me as a great teammate, great leader and great friend."pic.twitter.com/WBSl7E7TwE

Davison has been at the forefront of college basketball as one of the sport’s biggest villains over the last four years, but his career was supposed to a close with a loss in the NCAA Tournament. However, on Friday morning, Wisconsin announced that he was returning for a sixth season.

Wisconsin guard Brad Davison has been granted a sixth year of eligibility and will return to Wisconsin for the 2022-23 seasonhttps://t.co/eQy6K4zNhk

Here is how Wisconsin’s official announcement on Davison returning for year six read:

MADISON, Wis. – Wisconsin men’s basketball guard Brad Davison has been granted a sixth year of eligibility from the NCAA and will return to Wisconsin for the 2022-23 season. Davison was awarded a medical hardship for his 2017-18 season that was marred by a reoccurring shoulder injury.

“I’ve said all along that it’s been my dream to be a college basketball player and compete at the University of Wisconsin and I’m grateful for the opportunity to have one more season in the red and white,” Davison said. “I also want to thank Coach Gard for welcoming me back again and again and again and can’t wait to get start a new chapter with my teammates and staff.”

Davison, a native of Maple Grove, Minnesota, is scheduled to earn his master’s degree in May and will immediately start pursuing his doctorate from the University of Wisconsin.

“We’re thrilled to be able to have Brad on our roster for another season,” head coach Greg Gard said. “Brad has always said he wants to squeeze every drop out of the college experience and I guess he wasn’t kidding. We’ve never had a player go through three Senior Days.”

In response to the announcement, some college basketball fans were very upset. Others had jokes.

if im wrong im sorry but he can’t play any more right ? to use the 6 years you need to be red shirted at some point. he was never red shirted. he used all 4 of his years plus his covid year . pic.twitter.com/LuKBdCWEGq

This is sickening to even joke about tbh

Is he trying to play with his grandchildren?

No, it would be 6 if this wasn't a joke. He never had a redshirt season and was granted one extra year due to covid. Not that it matters though lol

It was Wisconsin and Davison who got the last laugh.

The whole thing was an April Fool’s joke. Davison will not be returning for a sixth year.

The Badgers knew that the fake announcement — which looks very real — would get a rise out of basketball fans and it did. Much of the college basketball world bought the prank hook, line and sinker.

Ultimately, it was all a big joke. Davison took to twitter and addressed the prank.

Thankful for the last 5 years! The Best is yet to come 👐🏼 https://t.co/FYH5jtWutm pic.twitter.com/QoWMZEYFXl

Don’t worry, Davison is gone. You may rest easy.