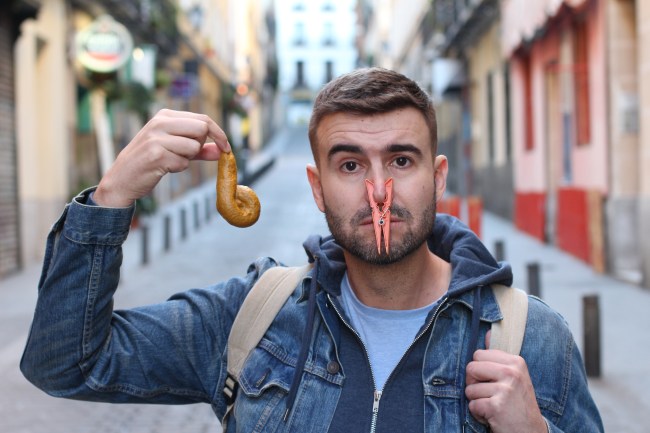 It has been a great week for soccer fans all across the globe. A lot of the top leagues take a few weeks off for Christmas and there’s a rush to get in games before the holidays, while England’s Premier League packs in a LOT of games in December and January which is great for fans.

In England, some fans have been allowed back into stadiums, a few thousand here or there. Fans were allowed back into London stadiums briefly before the restrictions changed again. It’s all dependent on the coronavirus threat in the area. But fans being back in the stands led to a bunch of soccer fans on Twitter sharing the most repulsive food they’ve ever eaten at a stadium.

This viral moment kicked off with an outrageously long hotdog that some people are describing as horrendous while I personally would be all about this and would eat it right now with a smile on my face. Here’s the tweet that started this:

What’s the worst food you have had at a football match? Here’s mine. pic.twitter.com/z9E9lHygKm

I’ve personally been curious about what they eat at stadiums in places like Barcelona or Milan. I believe travel TV host Adam Richman had a show about this at some point but I never got to see it or knew what channel/network it was on. After seeing these borderline inedible meals served across the UK I’m left with more questions than answers.

Here are some of the worst…It’s like they shredded cold a$$ cheese on top of frozen fries and didn’t bother seasoning them in the slightest bit. So bad.

Goodison Park is home to Everton, one of Liverpool’s biggest rivals, and a team that currently sits 5th in the Premier League table. It’s not like this is some 8th tier team in the middle of nowhere. It’s a club with over $2 billion, and this is what they’re serving in the luxury boxes.

I was offered this in the Executive Box at Goodison Park pic.twitter.com/8bq4FLuFmM

This is not a burger. Selling this as a ‘burger’ is just wrong.

My burger at Preston away 😂 pic.twitter.com/ETCvu2ut8I

Dafuq even is this?

I prefer the look of your sausage to this specimen I had at Swansea 😳 pic.twitter.com/S3ZOPIYnRu

Look at those toppings:

This looks like the meals served at Fyre Fest:

Showed up and this is all they served, there was no field and no football teams even showed up? pic.twitter.com/Wu3tFsl3lB

STOP. This cannot be real. Why are they lying to us with these. What is happening. I’m losing my mind.

There’ll only ever be one winner. The “cheesy chips” stands undefeated pic.twitter.com/F0TqjMyhmi

All I can think about right now is the time I sat in the Legends Suite Seats behind home plate at Yankee Stadium. A buddy’s girlfriend got her company’s tickets for a Yankees-Rays game. We got there an hour early for the all-you-can-eat lobster, crab, steak, and cocktail shrimp buffet with every other delicacy on the planet from sushi to made-to-order meals. And then you walked past a massive wall of candy and snacks on the way to your seat, all free (included in the ticket) and snacks + beers were delivered straight to our seats the entire game. I don’t even remember if the Rays won, that’s how good the food was. Actually, after typing out that sentence I just looked it up and the Rays beat the Yankees 5-1 that day (May 4, 2014).

British food is good. I’ve had some of the best meals of my life in London and in the countryside. They have an undeserving reputation for bad food. But I might have to change my opinion on this after seeing these pictures. My most memorable “food” moment in Soccer was a USMNT-Panama game in Panama where we were buying beers 5 at a time from literal children walking around in the stands with buckets full of beers. They must’ve been like 8 years old. It blew my mind.

As always, you can find me on Twitter at @casspa if you want to keep this conversation going.