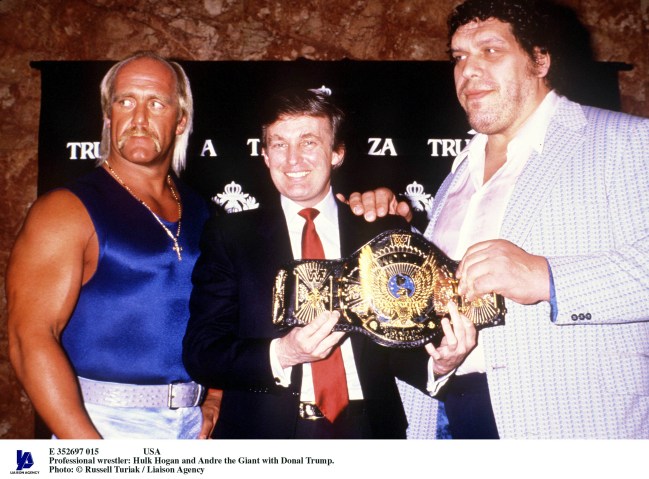 Childhood can be deceiving. Like the first time you bit into a Fruit Gusher thinking it would burst all over the walls like in the commercial – only to have purple corn syrup drool out of the corner of your mouth.

You believed whatever bright, shiny packaging you were sold, which means there were a bunch of outrageously-packaged wrestlers from your childhood that were way more badass than you realized. The main stream, specifically the WWE, had a way of turning even the biggest bad asses in the business into cartoon characters straight out of deranged comic books.

Here are eight wrestlers who were way more bad ass than you probably remember.

Lanny Poffo is the Emilio Estevez of pro wrestling. Both have intense, legendary fathers – Angelo Poffo broke the world record for consecutive sit-ups at 6,033 – and both have wildly popular brothers that are so insane that you only realize they’re related after someone points it out to you (for the record, no amount of drugs could make Charlie Sheen rant like Randy Savage).  Lastly, Emilio and Lanny are severely underrated.

What made Lanny so badass was his agility and high-flying ability, hitting flawless moonsaults, springboards and sentons decades before everyone else.  But his innovations were largely overshadowed by his gimmicks; throwing Frisbees to the crowd, wearing a full suit of armor in a battle royale, and donning a cap and gown to become the prancing and poetic Genius, which is what most people know him for. It’s kind of like his Mighty Ducks.

To be fair, we all know that Andre The Giant was a bad ass. The tales of Andre’s immense alcohol consumption and shitting in bathtubs are legendary. But if you’ve only seen Andre’s later matches, then you have no idea just how much of a badass he truly was.

Towards the end, most people remember Andre lumbering to the ring wearing black Spanx to hide his back brace and you’d watch his matches just to see if he’d fall over. But when he was fully mobile, he was absolutely amazing in the ring. I’ll let this GIF serve as my proof that Andre was so good that he’s also wrestling’s first hipster; he did the Tombstone before the Tombstone was cool.

If you saw the Bushwhackers in WWE you’d think they’re fun-loving New Zealanders who strut to the ring like power walkers on crack.  But that’s just the tip of a very violent iceberg.  Before they whacked bush, they were known as the Sheepherders (an ironically less intimidating name), terrorizing teams all over the world since the ‘60s.

They were known for their brutal and bloody brawls, throwing caution and the risk of Hepatitis C to the wind. They were pioneers of countless hardcore matches; barbed wire, steel cage barbed wire, fire barbed wire…I think you get the gist. They once had 37 barbed wire matches in a row – you know you’re badass when that’s your routine. But by the ‘90s, the Bushwhackers traded the gore for biting butts and liking faces, to the delight of a family friendly audience. Kind of like your grandfather, as long as no one mentions the war.

For all intents and purposes, I always thought Bad News Brown sucked.  He never had entrance music, he had a drunken uncle-sized gut, he was clunky, awkward and never seemed too interested in wrestling at all. Oh, what’s that? He was a world judo champion and was the first American to win an Olympic medal in the heavyweight division? Never mind then.

I guess he was so disinterested because he knew he could legit destroy anyone he got in the ring with. Allegedly, Bad News was such a badass that even Andre The Giant backed down from him. No wonder he didn’t have a theme song; “Gangsta’s Paradise” hadn’t been recorded yet. His badassery was well hidden under his gimmick, as just a ghetto grumpy guy who didn’t like people. Especially when he got into a feud with Jake ‘the Snake’ Roberts and brought out his “sewer rats”, which were clearly possums. I fell for a lot of stupid shit in my youth but I at least knew the difference between a rat and a possum. From Olympic Judoka to misinformed animal handler.

Lou Albano was the epitome of a slob.  He always looked like he was on a steady diet of meatball heroes and totally forgot to wipe. Lou was brash, obnoxious and rude, which makes his upbringing all the more ironic.

Lou was baptized at the Vatican, his mother was a concert pianist and his father was a doctor who invented an instrument assisting in breech births. By the time he was in high school, Lou was such a good football player (hence his ‘Captain’ moniker), that he was offered 32 full athletic scholarships. As a sign of things to come, Lou was expelled from the University Of Tennessee for cheating on his final.

While he wasn’t the greatest wrestler, he was so antagonizing that he became one of the most infamous managers ever. With safety pins and rubber bands hanging from his face (Lou Albano invented punk), his antics were so outrageous that he crossed over into pop culture. If not for his friendship with Cyndi Lauper and his appearances in her music videos (including ‘the Goonies’ theme, which you need to see immediately), the entire Rock n’ Wrestling Connection may not have happened. And if that ain’t enough, he gained Saturday morning immortality by playing Super Mario despite refusing to change his voice or mannerisms. The Vatican applauds you.

As he made the transition to manager, he became a magnet of entertainment icons. Regis Philbin had him as a guest on so many talk shows that Blassie claims to have made Philbin’s career. Andy Kaufman was such a fan of Blassie that they made a cult comedy film together (“My Breakfast With Blassie”, it’s as bizarre as you think).  Blassie also recorded two albums, with “Pencil Neck Geek” being a Dr. Demento chart topper.  But, most impressive of all, Muhammad Ali not only considered him an influence, but got Blassie to manage him during his infamous boxer vs. wrestler showdown.

Blassie also holds the distinction of being the only man to knee Ali in the nuts. Classy.

Remember when the Joker was a role that Caesar Romero wouldn’t even shave his mustache for, before it became a seriously badass, Oscar-worthy role?  You can thank Doink for that.

Matt Borne was a capable wrestler hampered by not-so-capable gimmicks, like lumberjack Big Josh, who came to the ring with actual “dancing” bears (I assume they were tripping on LSD to create this effect). But when he was given the gimmick of an evil clown, Borne dove right in and made Doink deranged, terrifying and incredibly badass.  He’d pull pranks on fans, laugh hysterically and then snap, beating the shit out of his opponent and giving the character a depth rarely seen at that time.

When he left the WWF due to drug problems (par for the course if you play a dark clown), they made other wrestlers don the makeup and play Doink as a babyface (replete with mini-clown Dink), but it was never the same.  Now, talentless, out-of-shape indy wrestlers everywhere play the character so horribly that no one can touch the original.  Oh, and his finisher was ‘the Stump Puller’, where he stood behind your head and pulled up your legs till you basically blew yourself.  Way better than the pencil trick.