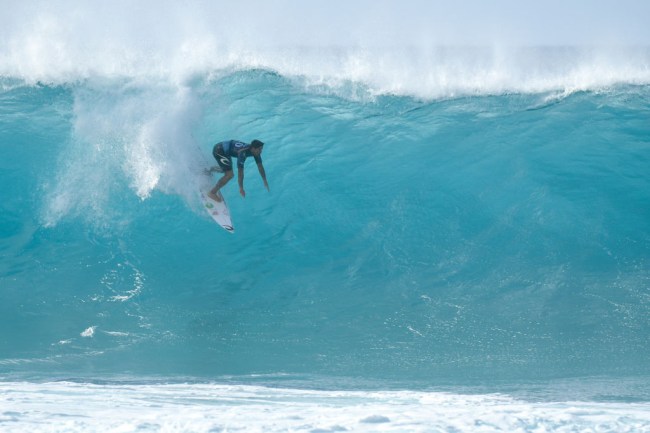 I love surfing as much as I hate the undeniable reality that I’m absolutely terrible at it, but that doesn’t stop me from throwing on a wetsuit and trying to catch some waves whenever I get the opportunity. There’s just something incredibly meditative about chilling in the water for an hour and that calming quality comes in handy when you repeatedly get your ass handed to you by the ocean during that period of time.

I should note that my idea of surfing involves inevitably wiping out on a wave the same size as the one an eight-year-old 100 yards down the beach is absolutely dominating with his boogie board. There’s a big difference between that and what is referred to as “big wave” surfing, which features the kind of raging waters Bodhi waded into at the end of Point Break and is perhaps the polar opposite of what I would call a “meditative experience.”

It’s a high-risk activity that requires a crazy amount of physical endurance and fearlessness and there’s no way to feel more pathetic about struggling to ride five-foot waves than you already do than realizing there are people out there conquering surf five times as large on a regular basis.

When you willingly subject yourself to waves that big, you do so knowing that the ocean is in total control of your fate if something goes wrong. All I have to do is watch guys get tossed around after wiping out on a huge swell—sometimes being held underwater and thrashed around for a minute or more—to know it’s not for me, but for some people, the risk is worth it because successfully riding a wave that big will get the adrenaline pumping in a way few other accomplishments can,

If you’re like me, you might even be able to get a little bit of a rush just watching people ride these monstrous tubes based on how I felt while watching this video that the World Surf League released showcasing the biggest waves some of the most insane people on the planet have conquered in 2020.

Surfers travel the world searching for swells like these and there’s perhaps no better place to find them than Nazaré, Portugal, which served as the filming location for seven of the eight rides in this compilation.

Kai Lenny’s attempt at the 50-second mark probably takes Biggest Ride of the Year honors but I almost feel bad trying to compare them, as you would have to pay me a very, very large sum of money to even attempt what the guys and gals in this video pull off (and I’d probably have to use some of it to pay someone to put together a will so someone else can have the remaining sum when I die in the process).