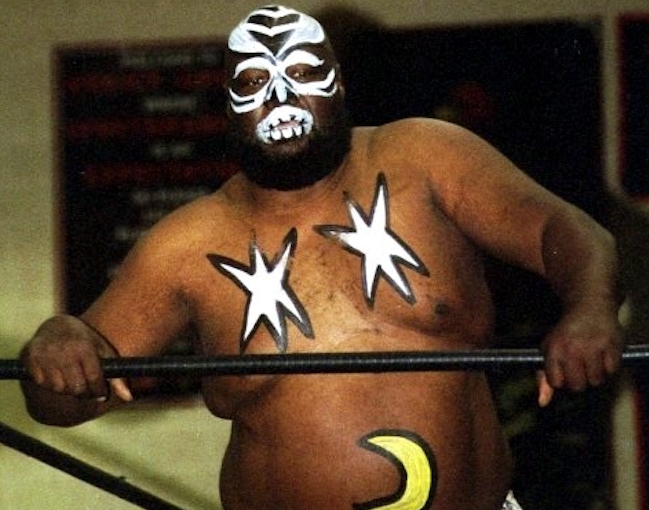 “The Ugandan Giant”, Kamala had a solid run throughout the late 1980s and early 1990s as a main event foe in several different federations, clashing with top stars of the time like Hulk Hogan, Andre the Giant, the Junkyard Dog and the Von Erich brothers.

The fearsome but simpleminded Ugandan warrior wrestled in war paint and a loincloth and terrified many a young wrestling fan.

With a career spanning over 30 years and always being featured near the top of the card, the average wrestling fan would assume Kamala, born James Harris, would have made a considerable amount of money.

Unfortunately, Harris has faced multiple health issues in recent years. Harris had his left leg amputated below the knee due to complications of high blood pressure and diabetes and then his right leg was also amputated below the knee. In 2017, he underwent emergency surgery to clear fluid from around his heart and lungs and went on life support following the procedure due to complications.

Kamala is on the mend and was able to write a book about his experiences in and out of the ring.

In an interview with Not In The Hall of Fame, the former WWE star opened up about his time in the federation, his disgustingly low pay-offs, poor treatment by road agents, and a secret he kept from the other wrestlers.

Kamala talks about his origins in the business and how – almost from the beginning – he didn’t make much money despite being a huge draw.

Kamala was smartened up to just how little he made when one of the other wrestlers snuck a peek at payroll.

“Steve Lombardi was in with the office and has been there some twenty years. He was running around and went into the room where Pat Patterson was. Patterson had left, and left his briefcase. He (Lombardi) was scrambling through his books, and he saw what I made and he was exactly right.

Not making much money lead to embarrassing situations on the road. Kamala shared a story about how money troubles lead to a secret he begged his managers not to tell to the other wrestlers.

“When I was in WWE, I just didn’t make any money. I can remember sometimes, it was me, Kimchee, and my manager Dr. Harvey Whippleman. All three of us would get a room together. [WWE] paid for our flight, but we always had to get our own rooms.

After renting a car and being the third man and renting a room, I would sleep in the rental car and not stay in the room so I could save money. I begged them not to let the boys know that.

I wanted to save as much money as I could to send back home.

Kamala shared more in the interview about being treated poorly by WWE officials and being forced to dress in a makeshift tent in the backstage area.

Read the full interview over on Not In The Hall of Fame.