Wyoming Is First College To Announce Student Athletes Can Return To Campus On June 1, Which Means The Floodgates Will Soon Be Open 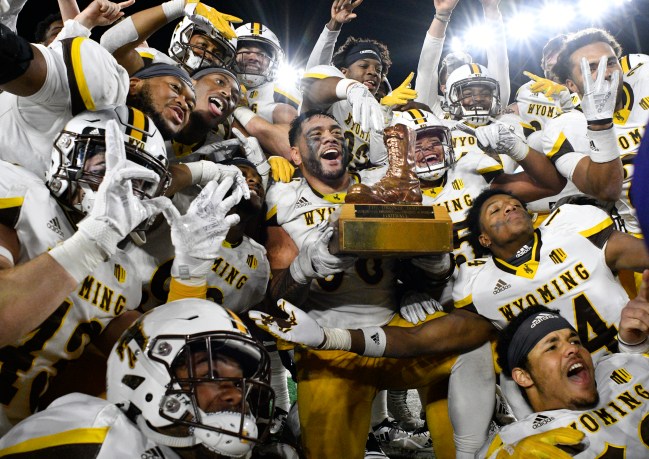 While certain states and cities around the country ‘re-opening’ at different times, it’s created quite the debate when it comes to students, specifically student-athletes, and when they should be welcomed back to campus.

The SEC has made some noise by stating that its 14 presidents will soon vote on whether to bring back student-athletes to campus as soon as June 1. Oklahoma head coach Lincoln Riley recently came out and said the idea for a June 1 return is ‘the most ridiculous thing I’ve ever heard,’ but the NCAA very clearly could not care less about his opinion.

On Wednesday the NCAA announced that it will allow voluntary athletic activities beginning June 1 and the first school to announce that they’re going to get back to work at the start of the month is Wyoming.

The university announced that it will allow football and men’s and women’s basketball players to arrive on campus as early as June 1. The student-athletes will be required to do a 14-day quarantine when they arrive on campus, however.

“Our first priority is the health and well-being of our student-athletes, our campus community and the surrounding area,” Wyoming’s Director of Athletics Tom Burman said, via Wyoming News Now. “We have done a deep dive into all of the options available, including quarantining and testing, and we feel good about our plan going forward. With quarantining and testing we believe there will be limited risk to our community, campus, staff and student-athletes.”

It’s worth noting that the state of Wyoming has seen some of the lowest numbers, per capita, when it comes to the virus with 596 confirmed cases and 19 deaths per 1 million of population. The population of Wyoming is less than 580,000, according to the old Google machine.

One would imagine that Wyoming opening its doors will open the flood gates for other schools to follow right behind them. Again, some college towns have been hit harder than others, but this is a good sign that universities will be welcoming back students sooner rather than later, at least in some parts of the country.