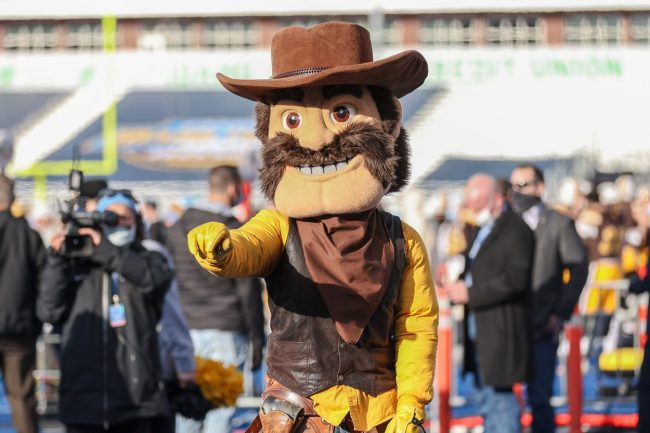 If you are reading this, you, yes, YOU, could be the next quarterback at the University of Wyoming. The Cowboys are absolutely desperate for a quarterback and are literally advertising for the opening online.

Sean Chambers, a junior from California, began the year as the starter. After five games, he was benched in favor of sophomore Levi Williams.

Williams went on to lead the Cowboys to bowl eligibility and earned MVP honors in the game. He popped off.

However, immediately after making it rain french fries on head coach Craig Bohl, Williams entered the transfer portal. Chambers joined him in the portal shortly thereafter.

As a result, Wyoming’s depth chart is sparse.

Currently, only freshman Gavin Beerup, junior Jayden Clemons and freshman Hank Gibbs remain. Beerup was a three-star recruit, Clemons was unranked on 247Sports’ composite rankings, and the same goes for Gibbs. The Cowboys also signed a three-star prospect in the early signing period, so there is that.

One of the four could foreseeably win the starting job for 2022. But, considering that the three of the four didn’t earn the job this year and the other will be a freshman, it’s unlikely.

In response, Wyoming made a very big statement. Head coach Craig Bohl, through the team account, released an announcement on Twitter that they are actively seeking a transfer or junior college quarterback.

It was the first time that a program made such an open pitch on an internet forum. It was almost like a Craigslist ‘now hiring’ ad, but for a quarterback.

To make the entire thing even more interesting, Wyoming fired off the tweet on Christmas Eve. The timing was strange, and it is truly an unprecedented move, but in a lot of ways, it is refreshing.

Rather than hiding from their current faults/needs, the Cowboys got ahead of the problem and let every quarterback out there looking for a new home that they are open for business. It’s a wild time for college football.