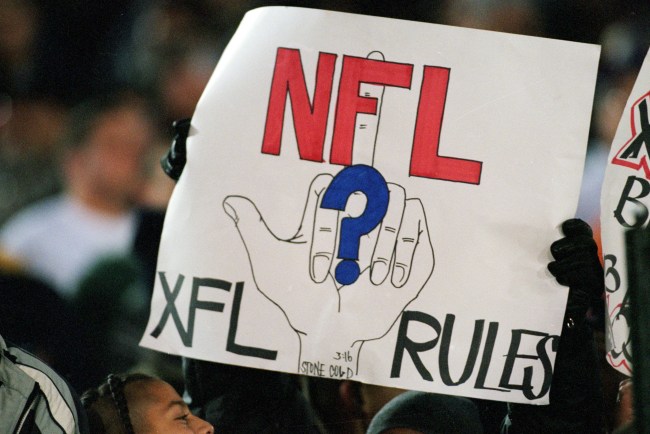 The XFL is back, baby, and football fans everywhere seem to be pretty stoked about it. While the league didn’t completely blow everyone’s minds during its opening weekend last week by being something never-before-seen, it did prove to be entertaining AF, with TV ratings pretty solid and engagement on social media steady.

With a better plan than the league had nearly 20 years ago — which includes the possibility of signing college players in the not-so-distant future — the XFL is redefining what pro football could look like in the years to come. That’s something the NFL can’t claim, as the “Not Fun League” refuses to try new things that appease fans and improves the game.

Sure, nobody knows what might happen with the XFL, and its founder, Vince McMahon is believed to be preparing to lose a whopping $375 million in the next three years in order for the league to survive, but early indications are that it could be the most successful pro football league not named the NFL ever created, which could leave the door open for collaborative efforts between the two sides.

One suggestion that could be fucking dope popped up on Twitter the other day, with the idea being that the XFL champion this year plays the worst team in the NFL mano a mano for the right to, potentially, swap places. Take a look below at the wild idea.

Now this something people will watch! pic.twitter.com/EgxO6zbYCX

Currently speaking, this would mean the Cincinnati Bengals would face-off against whoever wins the XFL this year, and, should the Bengals lose, they’d get demoted to the lesser league, while the XFL champ would get bumped into the NFL. Dudes, this would be insane, and something that would generate a ton of interest for both leagues — not to mention bring in lots of sponsorship cash.

Upon hearing the idea, people on Twitter were going nuts over it, reacting in a variety of different ways. Take a look below.

Xfl talent no where near NFL

This is dumb. There are multiple college teams better than the XFL’s best team.

The Jets would end up playing at least 10 seasons in the XFL.

Not a bad idea at all. Soccer leagues around the world do that

The nfl team would slaughter the xfl team 100-0 every time. they are in the nfl for a reason

Of course, the NFL would probably never allow this to happen. First off, they’ve always been so arrogant about their positioning as the top football league in the world, and wouldn’t need something like this to increase their standing as such. Second, the NFL has no reason to align with the XFL whatsoever. Even if the secondary league succeeds beyond expectations, its season schedule doesn’t compete with the NFL’s, so why work together if it’s not a direct competitor? Third, well, yeah, the NFL is a proud fraternity, so they wouldn’t dare sacrifice their reputation at the chance of embarrassing themselves to an XFL team — which, on paper, wouldn’t have near the talent to compete.

Still, it’s a wild idea that clearly has some people on Twitter wondering if it could, somehow, come to fruition. It may only be a dream scenario, but, shit, let’s hope the XFL and NFL can at least some opportunities to work together — because there’s just too much in common and potential at innovation not to explore it.