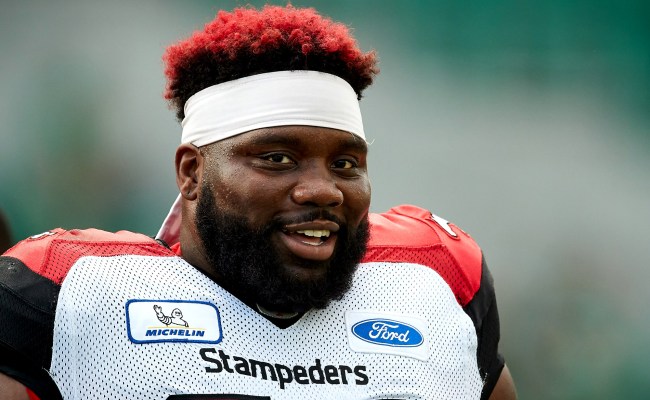 The XFL has so far pretty much taken a hands-off approach to signing any players currently on NFL rosters. Mostly because why would any player leave an NFL team to play in the XFL?

XFL commisioner Oliver Luck has said the XFL is open to signing college football players who are too young to declare for the NFL Draft, however.

The XFL also, apparently, has no qualms about going after and signing some of the best players from the the Canadian Football League (CFL).

The XFL will, over the next 48-72 hours, be making strong attempts to lure top CFL players away from the CFL to the XFL. They are wanting to do this via iron-clad exclusive contracts.

This we know because CFL fans, including former Calgary Stampeders linebacker Keon Raymond have been taking to social media to politely complain about the XFL stealing away their players.

We need to find a way to keep our players in @CFL It’s a problem when you lose a Future HOF receiver @SJ19_19SJ with over 10K yards & one of the leagues top lineman @6BONECRUSHER3 to a new league. 🇨🇦🇺🇸we need to keep our players playing in the worlds best league. We can do it ! https://t.co/Nq8070CjwZ

Green caught 716 passes for 10,222 yards and 60 touchdowns over 10 years with the Montreal Alouettes and three as a memeber of the Toronto Argonauts.

Green is currently a member of the Tampa Bay Vipers, while Dennis is on the XFL’s Team 9.

Green even tweeted in response to the complaints, “There will be more to follow.”

With regard to the X-odus taking place during the CFL’s offseason, Saskatchewan Roughriders head coach Craig Dickenson told the Calgary Sun, “I think you’re seeing less players available. There’d be more guys out there we’d be looking to bring in (if it weren’t for the XFL), but all of that has kind of already happened. If a guy is going to the XFL, he’s already there so we’re not competing for that guy.

“But yes, if there was no XFL there’d be a lot more players you’d be looking at to bring into rookie camp and workout this off-season. We’ll see how it goes. They’re playing games here pretty soon and I wish those guys the best. The more football there is, the better.”

Calgary Stampeders head coach Dave Dickenson said about the XFL’s impact on the CFL, “It’s harder to find quarterbacks right now because of the XFL. There were some players on our neg list who we thought would be ready to come up right now, but they’re just not. We’ve dropped a few guys because of that and we’re trying to find other players.”

This is a pretty amazing statement considering how bad the quarterback play has been so far in the first two weeks of the XFL season, reports Michael David Smith of ProFootballTalk.

This is why the XFL, with all its rules geared towards the offense, is averaging six points LESS than the average NFL game during the 2019 season.

Considering the XFL and CFL schedules don’t overlap, and the fact that the XFL currently plays just 10 regular season gaems, some are suggesting that there will be players competing in both leagues, grabbing two paychecks along the way.

Then again, if this anonymous member of the XFL’s Tampa Bay Vipers’ attitude is any indication, the CFL might not look like too bad an option after all.

I think it’s safe to say that many in the locker room have lost some faith in HC Marc Trestman, with 1 player saying-