Tim Tebow Has Had ‘Some Communication’ With The XFL, Says That He Loves What The League Is Doing 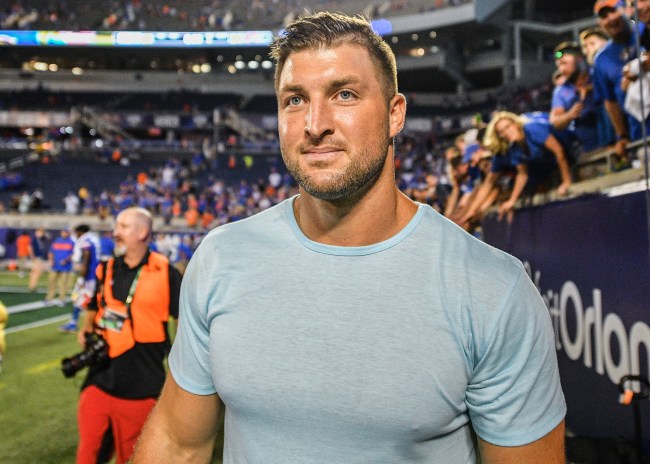 Things have gone well for the XFL through the opening two weeks. Most fans have more positive things to say than negative, the numbers behind ticket sales seem to be strong and plenty of people are tuning in on TV.

With that being said, most would agree that the league is still lacking that one superstar to really take things to the next level, especially when it comes to the longevity of the league.

Colin Kaepernick, Dez Bryant, and Johnny Manziel have been three names tossed around as possible options to join the league, but there’s a former NFL quarterback and Heisman Trophy winner that hasn’t really been mentioned and that’s Tim Tebow.

Tebow is getting prepared for another season in the Mets’ system, but that doesn’t mean that the XFL hasn’t been on his mind a little bit.

He was asked about whether or not he’s been in contact with the league and he confirmed that he has had some communication with them while also explaining that he loves what the XFL is doing.

“Yeah, there was communication. We had a couple of conversations, but it was pretty clear that this…I love what they’re doing, I think it has a chance to have success and I think that’s great. I think there needs to be a place for a lot of players that are really good and should and could be playing in the NFL, are better than a lot of NFL players. A chance for them to be seen, I think it’s awesome and good for a lot of guys that are going to get a spot on an NFL roster because they’re going to show a team that they’re worth it.”

The XFL reached out to Tim Tebow to see if he wanted to play:

"There was some communication" pic.twitter.com/qADv9yUKKf

So, while it’s clear that Tebow isn’t going to trade his baseball hat for a helmet anytime soon, it’s still interesting to hear his take about the league.