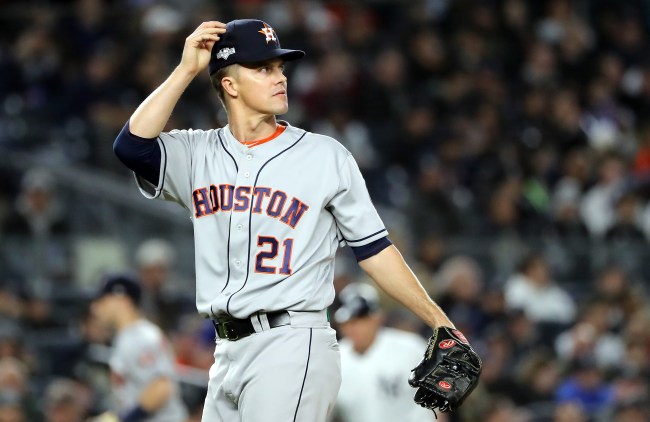 Imagine paying $180 (the average resale price for ALCS ticket) and getting nice and drunk before the game in hopes of seeing your team fight for a spot in the World Series only to be escorted out to the parking lot by police 20 minutes before the first pitch.

One Yankee fan, who is likely in a dark place right now, suffered through this experience after he hurled insults at Astros starting pitcher Zack Greinke during his warmup before an Astros 8-3 Game 4 victory at Yankee Stadium.

According to NJ.com, chants from the left field bleachers about Greinke’s struggles with a social anxiety disorder and depression were directed his way, struggles that nearly derailed his career in 2005 and 2006 and caused him to miss most of the 2006 season.

While it’s still unclear the exact chants being yelled, an NJ.com reporter tweeted that it had something to do with prescription medications.

Some fans were also leaning over the concrete barrier between the stands and the bullpen to insult the 35-year-old’s mother as well.

A Yankees fan was ejected as fans screamed at Zack Greinke before the game, disparaging his mother and his battles with social anxiety and depression.

There was a heavy police presence inside the Houston's bullpen and in the left field bleachers. https://t.co/KKttOw75Wy

Two police officers were stationed inside Houston’s bullpen, their backs against the wall as they looked toward the bleachers.

Another three uniformed officers were dispersed throughout the bleachers.

One of the officers stationed inside the bullpen pointed to a fellow cop in the bleachers and mouthed to him: “First one to mouth off, get him out.”

The ejection came in the wake of Astros manager A.J. Hinch threatening to “pull the team off field” if fans continued to throw trash onto the field near his outfielders like they had in Game 3.

Something to watch for tonight…

Hinch says he’ll pull the team off the field if a fan hits an Astros player with something: pic.twitter.com/pjYaXUXQfN

Astros right fielder Josh Reddick called Yankee fans “disrespectful” while adding that in Game 3 he saw “seven or eight water bottles out in the outfield, two baseballs got thrown from center to left.”

With the Astros up 3-1, they may only have to deal with Yankee fans one last time before punching their ticket to the World Series.

Yankee Stadium reminds fans to not be jerks pic.twitter.com/I7XKUi2vvU