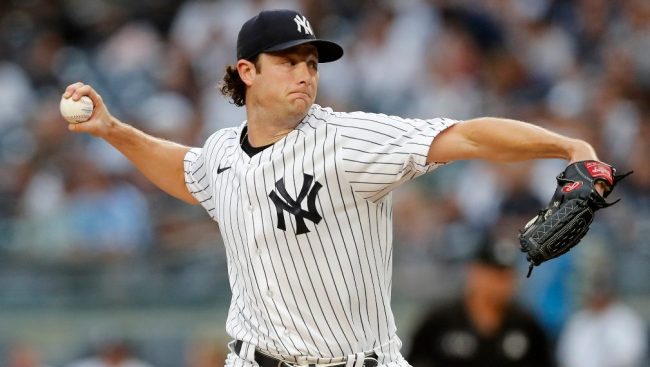 The New York Yankees have been on fire throughout most of the season. It’s been fun watching this squad hit the baseball as they’ve been one of the best in the league. However, some concerns are arising regarding the pitching rotation as Gerrit Cole had another bad outing. For that reason, the Yankees’ World Series hopes could be fading.

During a segment on the Rich Eisen Show, Eisen speculates some trouble brewing within New York’s clubhouse. Cole has been solid throughout most of the season, however, he does have terrible games every so often. Wednesday was no exception as he gave up six runs in the first inning to the Seattle Mariners. As Rich Eisen points out, that’s not something the Yankees want to see from their ace.

After giving up six runs in the first inning today against Seattle, @richeisen is concerned about the #Yankees:

Although the front office has brought in Frankie Montas to boost the rotation, the Yankees will be relying on Gerrit Cole through the playoffs. An ace shouldn’t be giving up six runs by any means, let alone in the first inning of a game. New York could be in trouble come playoff time, as an inning like that in the postseason is detrimental to their World Series aspirations.

There is still a great chance for this team to make a deep run in the playoffs. They have the best offense in the league backed by a steady bullpen. However, Gerrit Cole must lock it down moving forward or the Yankees could end up missing out on the World Series altogether.