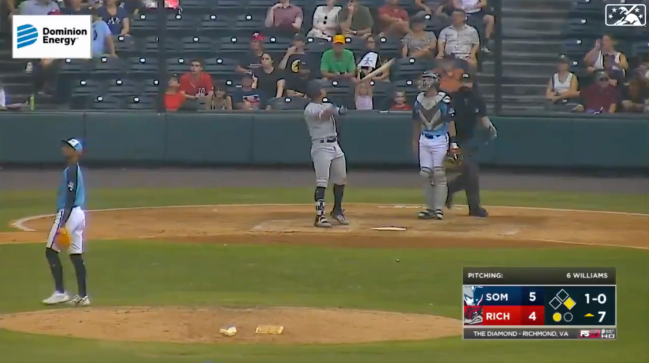 Yankees AA prospect Oswaldo Cabrera is hitting .260 with 12 home runs in 57 games so far this season. The 22-year-old from Venezuela is quietly making a name for himself in the organization. He decided to turn up the volume on Sunday.

Playing for the Somerset Patriots, his team took a 5-4 lead into the top of the 7th inning. Cabrera was hitting third in the inning and got up to the plate with one runner on and one out.

He took the first pitch for a ball, before smashing the 1-0 offering a billion feet to right field. It was a no-doubter off of the bat.

Cabrera knew it right away and turned to his dugout. After a short pause for dramatic effect, he took the bat in his right hand, cocked it back and LAUNCHED it toward his teammates. The bat, which was sent into orbit, landed before the ball, which was sent to another galaxy, even landed.

Cabrera’s bat flip was less of a flip than a toss and less of a toss than a chuck. It is unlikely that there will be a better bat toss this season in minor league baseball, so appreciate it in the moment.

To make it even better, he takes a long time to get around the bases and the opposing catcher had a few words as Cabrera walked to the dugout.

Admittedly, it seems like a strange spot to be that passionate. The Patriots are winning and the home run extends a lead in the seventh inning. It isn’t a walk-off… it wasn’t in the championship game… so why the celebration?

According to Yankees hitting coordinator Dillon Lawson, Cabrera’s teammate was beaned earlier in the game.

When your teammate gets thrown at and hit while standing 6 feet outside the batter’s box… https://t.co/ZvajxgtyjU

There isn’t visual evidence that can back up the fact that one of the Patriots batters was hit by a pitch while standing outside of the box, but Cabrera’s bat toss certainly alludes to the claim being accurate.

As BroBible’s resident bat flip expert, I can say for certain that there was some bad blood here. While Somerset lost the game and Cabrera ended up falling a triple short of the cycle, he was the big winner.