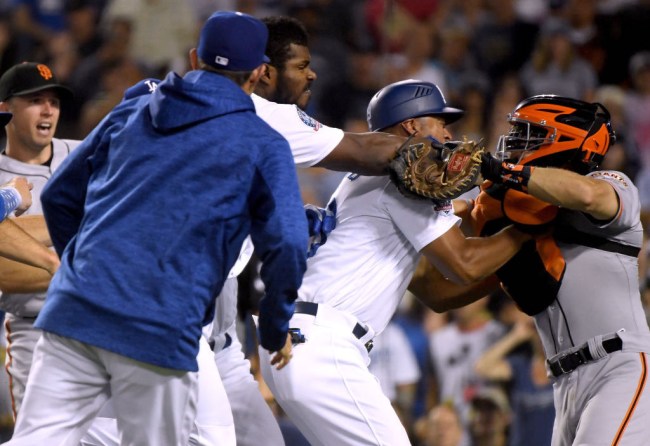 There’s no sport out there that loves unwritten rules more than baseball, which has a truly absurd long list of ways players are expected to behave if they don’t want to be on the receiving end of a ball traveling at 95 MPH.

Most baseball fights are based on a very simple mathematical formula, which is basically:

However, the Dodgers and Giants decided to switch things up a little bit during a game in Los Angeles last night thanks to Yasiel Puig.

Things themed to be going well in the bottom of the seventh inning with Puig at the plate and fans being serenaded by the theme from Harry Potter being played on an organ.

However, that changed rather quickly when Puig suddenly decided to throw hands (or, more accurately, hand) at Giants catcher Nick Hundley, which sparked a good, old-fashioned bench-clearing.

Benches clear in Giants-Dodgers game with Nick Hundley and Yasiel Puig at the center of it. pic.twitter.com/r3ZHHdzL3A

Here’s the full sequence of events if that clip wasn’t enough to do it for you.

According to ESPN, both Puig and Hundley were ejected for their troubles, and each player offered their own account of the incident after the game.

Here’s what Puig had to say:

“When I missed the pitch, I knew I thought it was the best pitch that Watson was gonna throw me. So I was a little upset, and [Hundley] told me to stop complaining, get back into the box. And when I got in his face, he told me to also get out of his face. So that’s when I got upset.

I didn’t like that he was telling me what to do, and then he said some words to me in English that I really can’t repeat. So that is why I was upset.”

Hundley also offered up his own version of the events:

“We’re competing on the field against a team we’re chasing. They’ve been scuffling a little bit, and we’re trying to catch them. Obviously a nice rivalry. We had some words and pushed a couple times. There’s really not more to it than that.”

The two teams will face off again tonight so we’ll see there’s any further retaliation in the cards.