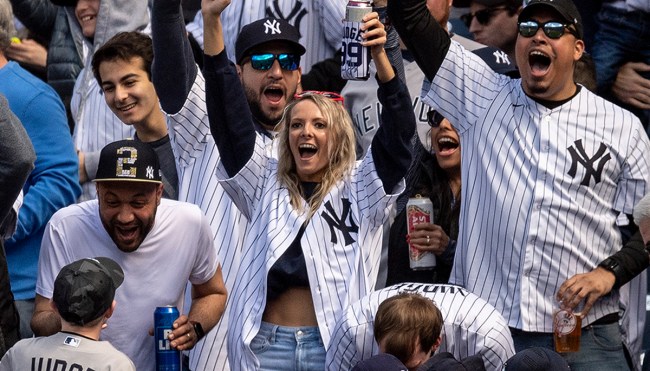 You don’t have to be a diehard baseball fan to know the outfield stands have traditionally served as the Mos Eisley of many ballparks; a hive of scum and villainy that is not for the faint of heart thanks to the bleacher creature that tend to inhabit the so-called “cheap seats.”

It’s obviously unfair to paint every person who sits there with a broad brush (and worth noting that kind of atmosphere it’s by no means unique to the Bronx). Sure, it’s hard to ignore the frequency with which those kinds of aforementioned incidents occur, but most people who sit in the bleachers are just there to have a good time—which is exactly what one group got over the weekend courtesy of a young fan.

During Sunday’s showdown between the Bronx Bombers and the Astros, a young girl sitting in the right field stands decided to entertain herself by trying to land a water bottle flip on one of the bleachers.

The action on the diamond briefly took a backseat as many of the fans in the section turned their attention to her attempts, and she was treated to an amazing reaction after successfully nailing it after a few tries.

This girl had the whole section rooting for her bottle flip pic.twitter.com/CxSyGP7OKx