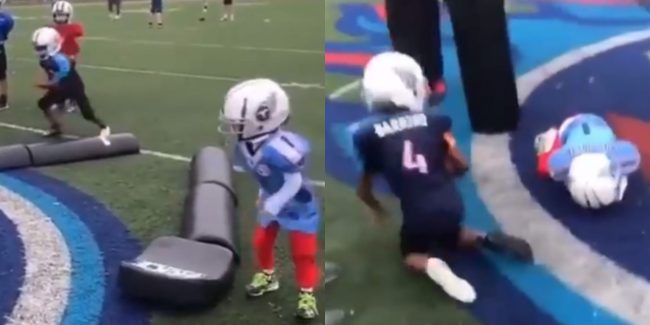 The youth football coach who allowed kids to participate in a violent drill is no longer coaching for the team.

Are they too young to be doing this drill? pic.twitter.com/lA8G9U86Wx

Apparently, the video was taken in September 2020 and the local youth athletic organization had been aware of it and handled the situation by removing the coach at the time after an investigation took place.

The attorney, Christopher Duggan, told USA TODAY Sports in a written statement that the Wesley Chapel Weddington Athletic Association – a youth sports organization in the outskirts of Charlotte, North Carolina – first learned about the collision in September and commissioned an investigation.

“This drill occurred back in September 2020 on a team with a first year coach in the program,” Duggan wrote in the statement. “This was addressed immediately with the coach when it happened as this was deemed not an acceptable drill for this age group or the experience level of these players. Subsequent to the coach being removed from his position, there were no other incidents or issues with this team during the remainder of the season.”

“We are deeply disturbed by this video and are investigating,” Heffron said, via Ryan Gaydos of Fox News. “If, in fact, it was Pop Warner coaches leading these drills, we will take action.

“What we saw was dangerous and, frankly, offensive to the overwhelming majority of our coaches who teach the sport the right way. We expect every coach to adhere to mandated training and focus on the proper, safe progressions of tackling techniques, including practice against dummies, particularly at such a young age. Over the past 10 years Pop Warner has instituted a number of player safety rules, and this example runs counter to our practices.”