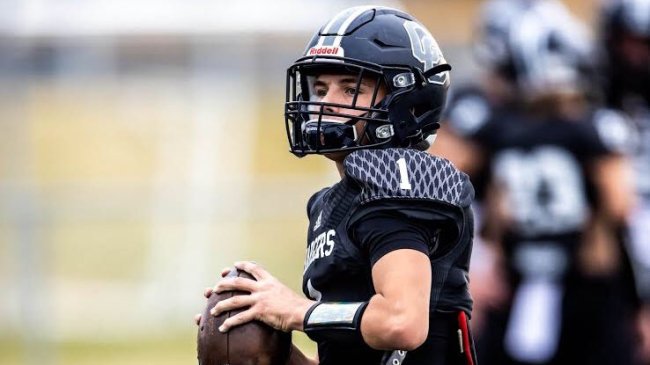 Isaac Wilson is a splitting image of his big brother and New York Jets franchise quarterback Zach Wilson. The class of 2024 recruit is the youngest brother of the Wilson family and will be a junior in high school during the upcoming fall season.

Most recently, he flew over to San Diego State and took some fire visit pics.

As of right now, it’s a fairly safe bet to assume that Isaac could head to Provo, Utah. However, there is a lot of time left in his recruitment and he is set to gain quite a few more offers all over the country before it is all said and done.

The rise of Isaac.

Wilson and his team ‘The Pink Outlaws’ partook in a 7-on-7 competition over the weekend and he showed off his arm. He throws a deep ball just like his big brother and has an uncanny ability to throw his receivers open with a laser to the corner.

As his recruitment started to heat up, Wilson partook in the Rivals Camp Series in Los Angeles back in March. He was throwing darts.

Wilson was also a standout at 7-on-7 camps last summer and shares the same traits as his oldest brother. The kid can sling it.

Isaac Wilson is slated to be QB1 for Draper Corner Canyon High School come the start of the 2022 season.

He made one appearance on the varsity team as a freshman in 2020 and saw some time late in games as the backup in 2021.

His predecessors, Jaxson Dart and Devin Brown, both left Corner Canyon as four-star recruits and are enrolled at Ole Miss and Ohio State, respectively. Isaac Wilson is not far behind in talent and looked great in his limited opportunities.

He threw 45 touchdowns in 9 games on the JV level. Look at him drop this ball into a bucket.

Some of Isaac’s mechanics could use some work, just like his brother. However, the arm strength is there and he’s equally as mobile in the pocket.

There is a lot of time for Isaac to continue to grow and more time on the varsity level, and at various camps over the next 23 months, will allow him to do that. He already proved last season that he can play with the big boys.

Now, after waiting his turn, it is likely to be his team with two years to lead Corner Canyon to the heights of Dart and Brown.

Isaac will only get better in the next three years and his offer list is set to expand rapidly if he can get anywhere close to the production of his big brother. Look out for little Wilson.