Zach Wilson Gets Forced Into Doing ‘The Wave’ By Mystery Woman, His Reaction Is Extremely Relatable 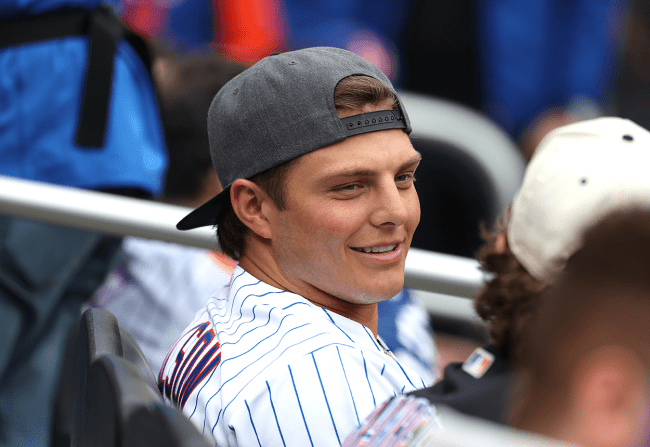 The New York Yankees might want to recruit Zach Wilson. Not as a player, but as a fan.

The Jets quarterback was in the Bronx on Wednesday night as the Bombers played to a 4-3 win over the Rays. But he wasn’t alone!

Wilson, who scrubbed his old girlfriend from his Instagram account earlier this year, was shown on the YES Network alongside an unidentified lady friend. During his time on camera, the former No. 2 overall pick partook in an incredibly relatable moment.

Wilson did ‘The Wave.’ Just not quite by choice.

Wilson appears to be one of the latter. At the very least, if not hate, then he isn’t a willing participant.

As the camera showed Wilson and his date (?), it showed her grab his hand as the wave made its way around the stadium. When it was their turn to stand up and throw their hands into the air, she lifted his hand up to join in.

Wilson, who can’t help but crack a smirk as his hand was lifted to the sky, did not seem to be interested in The Wave as he saw it come around the stadium. He murmurs something to the woman he was with and takes a sip of his drink to try and avoid his turn.

Zach Wilson did the wave, whether he liked it or not. It was an incredibly relatable, hilarious moment.

why is Zach Wilson being forced to do the wave so funny to me pic.twitter.com/WRaJPlSwGj

Of course, Jets fans immediately joked that the mystery woman needs to be careful with his throwing arm. What a shame it would be if he went out for the season because of The Wave.