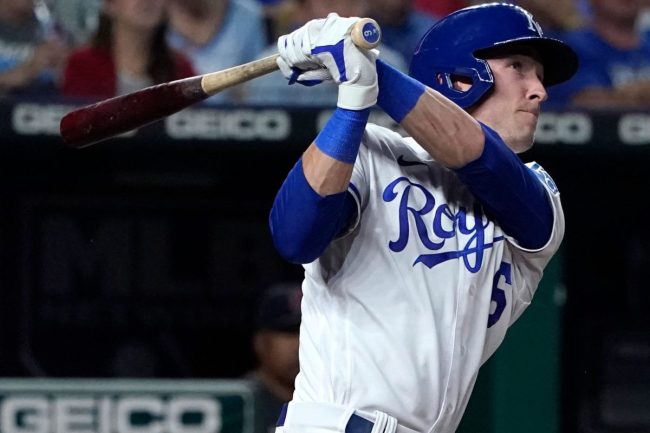 Royals’ rookie Drew Waters notched his first career home run on Monday, smacking a bomb in the fifth frame of an extra inning loss to Cleveland.

The outfielder made his MLB debut in late August, getting the call up from Kansas City’s farm system. Upon arriving to the bigs, though, he was met with a bit of doubt from a teammate.

Waters proved the pitcher wrong on Monday with this 400-foot shot to right field.

While most of his Royals teammates were happy to see the youngster pop his first homer, Greinke wasn’t quite as elated.

Greinke had to pay off a $100 bet made shortly after Waters was called up to the bigs.

Drew Waters said Zack Greinke bet him shortly after he was called up that he wouldn’t hit a homer with KC this season. When Waters went deep tonight, Greinke was the first person he was looking for. Waters’ thoughts as he ran the bases? “I just got Zack Greinke’s 100 bucks.”

Waters has since received the $100, and he’ll be sure not to let his Kansas City teammate live the moment down.