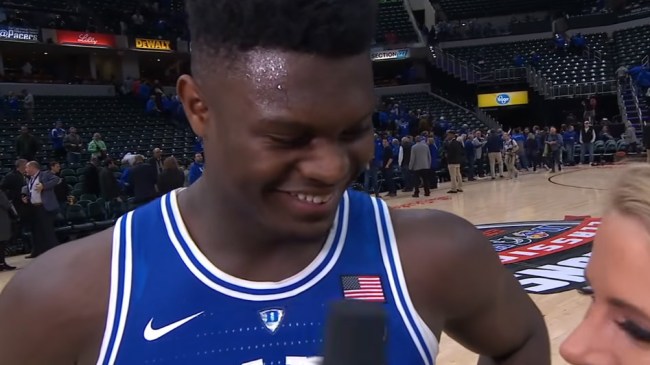 Everyone knew Duke teammates Zion Williamson And RJ Barrett had the potential to be game-changers once they left college and entered the NBA. Little did we know that they would start changing the game before they ever set foot on an NBA court.

We still have about four months to go before the former Blue Devils roommates actually play in a regular season NBA game and they are already breaking records… when it comes to merchandise sales.

The record-holder for post-draft merchandise sales was previously held by Pelicans guard Lonzo Ball following his selection by the Lakers in the 2017 NBA draft.

According to Fanatics, the sports-licensing firm that operates the NBA’s online store, via the New York Post, Williamson is blowing the competition away, having already sold more jerseys and t-shirts than the entire first-round of the 2018 NBA Draft combined.

An even more shocking number might be the amount of merch the third pick in the draft, Barrett, taken by the Knicks, has sold.

While trailing Williamson, Barrett has still sold twice as much merchandise as Ball, the previous record-holder.

They are “both likeable, well-spoken athletes who don’t have any baggage,” sports marketing consultant Joe Favorito said of the former Blue Devils teammates, who are also best friends.

The hype for Williamson’s NBA arrival has often been compared to that for superstar LeBron James when he was drafted in 2003. But it’s not clear whether his marketing muscle will surpass King James’.

“At the end of the day, how he and RJ play in the NBA will determine their ultimate value,” Favorito said.