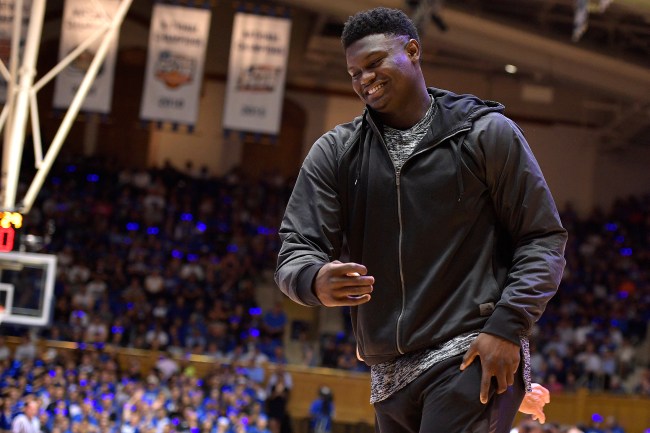 Zion Williamson appeared on an episode of “The Old Man and The Three” with J.J. Redick and Tommy Alter to shine a light on a high school teacher who a lesser man would have already forgotten about.

Zion took us back to his senior year at Spartanburg Day School, the spring of 2018, a full four years after he was offered his first college basketball scholarship. Zion had every reason to Bueller his way through high school, but instead he engaged in the process, and even gained a passion that helps instill perspective about fame and vulnerabilities: poetry.

This is one of my all-time favorite podcast moments ever. So cool to see a superstar like Zion open up and be vulnerable like this.

Zion begins by praising now retired Spartanburg English teacher, Bill Pell, who challenged him to search within for meaning in the mayhem.

“Mr. Pell, he was such a great guy, really knew his stuff about sports, just a kind guy through and through. One day he came to me, and he was like, ‘Z, I want you to actually try. Like don’t just get the grade. For me, I want you to talk about something real about you.’,” Williamson said. “At first, I couldn’t come up with anything. So I go home and I’d just got off the phone with a college coach, and I was thinking, ‘This is stressful, I don’t know where I’m going to go’ — I can write about that.”

Zion then began writing about two sides to the fame coin.

“I’m my poem I wrote about two people. One, you got a guy who flies, who can’t do any wrong, wherever he goes people love him. He gets pictures, people just want to be around him. Wouldn’t you want to be that guy?

Now let’s talk about Guy #2. He can’t say no to a picture because that person’s going to make him feel bad or they feel bad because they feel like they’re never going to be in that situation. Or if I tell one person yeah, I have to tell the other person yeah as well because they it feels like you’re picking favorites. You gotta be able to pick a school while letting other coaches know you don’t want to go there. I pretty much talked about the cons of being in the limelight at such a young age.

And then at the end I wrote, ‘What if I told you that that was the same guy?’

…I’ll just be in my room sometimes, and I’ll just type up a poem because (Pell) made me feel like that’s a way I can express myself without always having to be out in the public,” Williamson said.

Pell, who taught at Spartanburg High School for 35 years before retiring, said of High School Student Zion, according to Go Upstate:

“He’s a heck of a poet, I can tell you that. I’ve seen a lot of student writing in my time and by the end of the year it was some powerful stuff,” Pell said. “He wrote a series of absolutely tremendous creative poems.”

Forward this to a teacher folks!