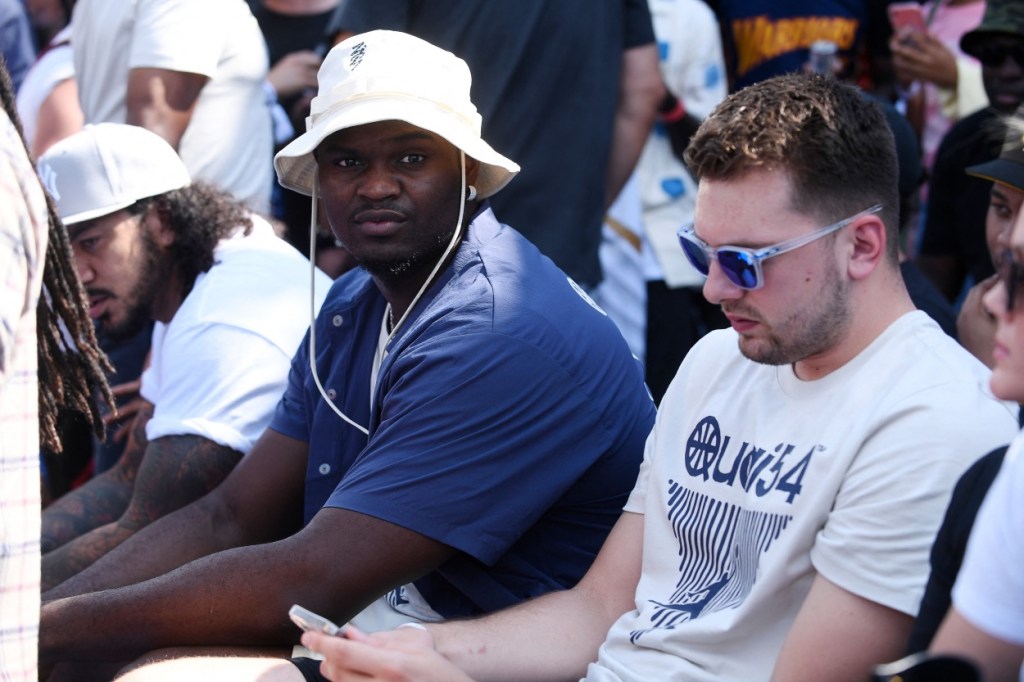 Zion Williamson hasn’t seen game action in the NBA since May 4, 2021, when he put up 23 points, 12 rebounds, 7 assists, and 4 steals against the Warriors. He spent the entire 2021-2022 NBA season rehabbing foot surgery to ensure it would heal correctly and then in the 2022 offseason, Zion signed a massive 5-year rookie extension worth $193 million guaranteed and up to $231 million.

The #1 overall 2019 NBA Draft pick will likely be an overnight superstar in the NBA once again when he retakes the court at full health. And though we’re two months away from the start of the 2022-23 NBA season, Zion Williamson already taking steps to raise his profile in the media.

He recently went to San Diego Comic-Con with <em>GQ writer Tres Dean where Zion shared his long-time love of Anime, particularly Naruto. Zion was actually there to participate on a panel about Naruto and he went in a bit nervous because he was worried he’d come off as a ‘salesman’ or a ‘tourist’ but it all went well.

The GQ profile on Zion Williamson was published on Monday and quickly took the internet by storm. It resonates with the millions and millions of anime fans, many of which rarely get the chance to openly talk about their passion.

Specifically, within the NBA Zion estimates 4/5ths of players are into it. He also believes it’s the perfect genre for pro athletes:

Zion estimates that around 80% of players in the league are into anime; they just won’t admit it. Those familiar with the conventions of the form know that it would be hard to craft a genre better suited to professional athletes: Shōnen anime (the term for shows targeted at boys) often revolve around a protagonist striving to achieve greatness in their chosen field, be it high seas piracy (One Piece) or fighting alien warlords using energy blasts so powerful they turn your hair gold (Dragon Ball Z). They’re long-form stories about what it takes to be The Best—not incidentally, the same goal that drives athletes.

Why are NBA players hiding their love of anime?!

Zion didn’t elaborate on why 80% of NBA players are into anime but aren’t more outspoken about it.

Interestingly, Zion Williamson credits the inspiration he found from Naruto as helping him rise to the challenge of being the ‘next great thing’ in college and the NBA. He sees the path of the show similarly to his ascension to the NBA’s #1 overall draft pick in 2019 and the road ahead of him now.

That’s when his Naruto fandom became something more totemic. “For a while nobody took Naruto seriously,” he explains, “And then he went and trained with [master shinobi] Jiraiya for three years, right? And he came back at 16 years old, goated.” The storyline reminds Williamson of the years he spent being coached by his stepfather, Lee Anderson. He considers Anderson taking him under his wing perhaps the single most pivotal moment of his life.

The profile on Zion’s love of Naruto is stellarly written. It becomes clear how impactful the show has been to Williamson’s life as he’s struggled with injuries and he sees himself in the hero’s journey. To Zion, it’s not abstract. He really draws direct parallels from the show to his life:

There’s a slight pause. “And Naruto, he started hyperventilating because that’s a lot of pressure. He’s just a kid, and that’s his friend, you know? He really cared for him. And all anyone was telling him was that he needed to handle it, to take him down. Nobody ever asked him how he felt…” He answers my next question before I can ask it. “It’s been a lot. I can sit here and explain it, but nobody will really be able to feel it the way I did. My foot was broken and I couldn’t magically heal it. It hurt, because I love the game of basketball. But because of it I was experiencing hate and pain from people I don’t know every day, and it started to wear on me.”

Naruto showed up everyday even when he was injured he was trying to get out there. I'm not getting that same vibe from zion

No way this dude is using an anime mindset 💀😭

I imagine Zion was like 5x the size of his classmates which makes this funnier to imagine:

Zion said he’s gonna stay true to himself no matter what because that’s what Naruto did. I ❤️ him

It’s clear that in anime, Zion Williamson has found something he unabashedly loves. I’m getting stuck on his comment about 80% of NBA players being into anime but none of them ever talk about it because why would you ever keep something you enjoy secret when it’s something that’s so popular? What is there to be secretive about?

… You can check out the full profile on GQ right here. I’ve never actually watched Naruto but I’m going to start it tonight after seeing how it’s impacted Zion’s life. So he’s at least had a hand in making a new fan.

Zion Williamson throwing down a monster dunk but what's going on with the floor? https://t.co/yBiWT9YqKu