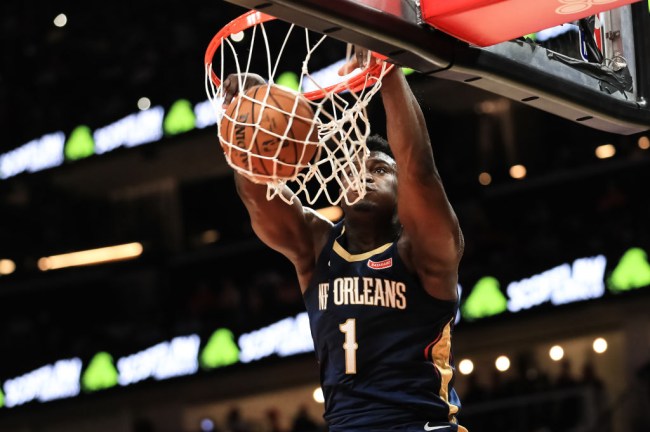 Do you want to live in a world where one of the greatest and most ferocious dunkers in the history of college basketball doesn’t participate in the NBA Slam Dunk Contest? I sure as hell don’t, but that may become a reality as Zion Williamson is undecided whether or not he’ll participate this year.

According to Eric Woodyard of ESPN Williamson said it’ll be a ‘game-time decision’ on committing to the dunk contest saying ‘it’ll depend on where I’m at.’

With NBA All-Star Weekend set to return to Chicago this February, Pelicans rookie Zion Williamson tells ESPN he's a "game-time" decision on committing to the dunk contest. "I don't know yet, if I'm being honest, depends on where I'm at," he said. https://t.co/5sRib29YrK

With that being said, this is actually an improvement on this front as a couple of months ago he came out and said he wouldn’t participate, so we’ve got that going for us.

Williamson may be the most hyped-up rookie in the NBA since LeBron James and he may take one out of James’ playbook and never participate in a Dunk Contest, but only time will tell.

There isn’t a person walking the planet that would say ‘nah, I don’t want to see Zion in the Dunk Contest.’ The guy has actual pogo-sticks for legs and throws it down as hard as anybody that’s ever played the game.

He’s been throwing down dunks like a grown man for years now and there is no telling what he could be able to pull off at the Dunk Contest given some time to cook some stuff up in the gym.

In his first preseason game with the Pelicans the Duke product pulled this out of the bag.

He participated in the McDonald’s All-American Slam Dunk contest a couple of years ago and you guessed it, he put on a show and won it.

The Dunk Contest does put a lot of pressure on the top players in the game to perform. For guys like LeBron and Zion, if they participate and don’t win they’ll be ridiculed for it which then starts the cycle of them having to prove themselves the next year.

It’s understandable to skip looking at it as a lose-lose situation, but Zion is a once in a generation dunker and to not see him put on a show in the Dunk Contest would be a shame.