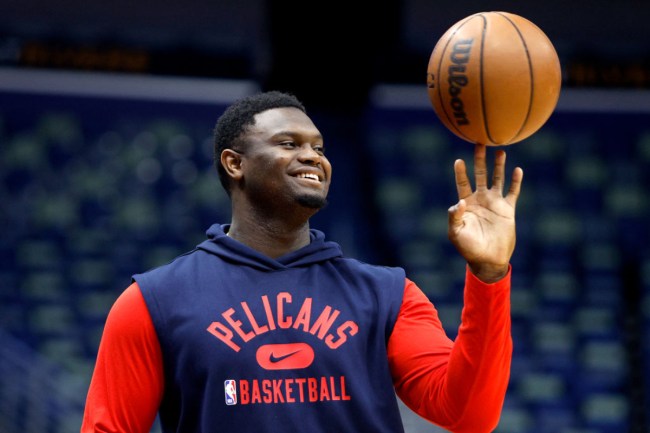 The New Orleans Pelicans held their end-of-season media session on Friday after being bounced from the playoffs by the Phoenix Suns. While Zion Williamson didn’t play in the series, or a single game all season, he was still involved in the press conference and delivered quite the statement.

Williamson was asked about potentially signing an extension in New Orleans.

“Of course, I couldn’t sing it fast enough,” Williamson said, according to Will Guillory of The Athletic.

There are two very key things to point out here.

One, it’s unclear whether or not Williamson is referring to signing a rookie scale contract extension or a maximum-salary deal. Of course Williamson would sign a max deal, every player in the NBA would.

That brings us to point No. 2, the Pelicans have to actually offer an extension.

As Williamson continued to rehab his surgically repaired foot and not take the floor this season, rumors began to swirl about his future. Perhaps the Pelicans could move on from their first-overall pick, or maybe Williamson himself could be looking for a way out of New Orleans for a fresh start.

Based on these comments from the man himself, it certainly sounds like Williamson wants to stay in New Orleans. The future seems to be as bright as ever in New Orleans at the moment despite losing in the first round of the playoffs, and maybe Zion wants to help build something special with the Pelicans.

They told me he wanted to go to New York? https://t.co/ISBa4f5mZt

Damn it’s almost like the media was wrong and Zion was just minding his business!@PelicansNBA my dude is ready for the long haul @Zionwilliamson https://t.co/g2tFaNYUMd pic.twitter.com/WRQEMRigHa

Better not be a max deal. https://t.co/bBJHtJGrqH

Where’s all the “zion doesn’t want to play in Nola” people 😂😂😂 https://t.co/yrw8okflUb

What are the talking heads going to say about this? Lol. https://t.co/UTJTqBFD13